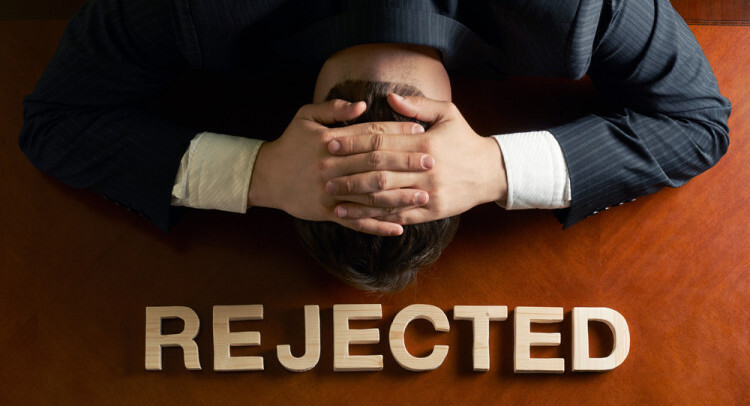 Your plan just got rejected. Welcome to the club.

Whether it was angel investment you were after or venture capital, or even investment from friends or family, you didn’t get the money.

Reality check: You’re the rule, not the exception.

Also, please don’t get strung along forever with would-be investors who flirt with you but never decide. Assume that for investors dealing with startups as prospective investments, a yes means maybe and maybe means no.

[Tweet “If an investor says yes they mean maybe, and if they say maybe they mean no – via @Bplans @TimBerry”]

In an earlier post here on Bplans, I suggested that investors offer a useful filtering process for businesses:

The investment process works as a filter, sorting business plans, pushing some to the top and others out of the way.

This filtering process is a good thing for many entrepreneurs who have the sense to listen to it. If the investment community doesn’t invest in a plan, there may well be some very good reasons why not.

Sure, there are exceptions, people who made their own way despite rejections and hit it big.

However, there are a lot more cases of people who didn’t listen to investors and pushed their plan anyhow, borrowing too much money, investing funds of friends and family, and ending up in failure.

So my suggestion here is simply put, get a clue.

Way too many people blame the investors. They didn’t get it. They weren’t listening. They were biased because of one factor or another. One key person had it out for you, and sabotaged the deal. Don’t ever talk like that. Even if it’s true, you still come off wrong. Anybody familiar with angel investment and startups will take that the way a potential employer takes it when you complain about your last job while trying to get your next job. You’ll never get a fair hearing.

Others blame the process. If only they’d had somebody introduce them sooner. If only they’d used a different forum, or format. If they’d taken the first appointment, or the last one. If they’d had a better pitch deck, or a shorter summary. If they’d edited their business plan better, or made it longer, or shorter, or added more appendices.

Don’t give up just like that; take the second step below and diagnose your situation. Notice that what I’ve suggested here is what not to do: whining, blaming, complaining—rather than what to do. That comes next.

Part 2: Do a deep-dive diagnosis

Take a step back from your disappointment and dive into pulling the real meaning out from the murky emotions and confusion, into the opening of cool hard business analysis and realistic next steps.

You need to decide whether to revise and try again, or revise and change directions, or give it up. Of course there are infinite variations on those three themes, but you get the point.

Start your diagnosis by getting as much feedback as you can from the investors who rejected you. We’re all human, including those investors, and nobody likes rejection. Most of them aren’t anxious to get you real feedback, because it’s delivering bad news, and not fun. And, it’s not their duty.

Most of the investors I know and work with try to give good feedback with rejection, but they don’t always manage. Feedback may not be formal, and may depend on the good intentions of only one or a few of the people involved. Make an effort to get feedback, and if you get it, be grateful for it. To smooth the process and make it easier for everyone, ask specific questions.

Here are a few common problems with startups from the investors’ point of view:

1. They want a credible management team with prior startup experience. A startup is a special experience, and investors don’t want to fund your first trip. You don’t have to have a success in your background—failures teach a lot. Just know what it’s like. And a team or two or three people, who have backgrounds that indicate they can do what they have to do, is better than a single founder.

2. They want a potential big market, with good product-market fit, so there’s a shot at growing your valuation 10, 50, 100 or more times what it is when they write their check. As a corollary to that, they want your business to be able to scale up, so it’s either product or web or mobile based, or it’s a productized service. Can you increase sales tenfold without having to increase your headcount proportionately? If so, then it’s scalable.

3. They want defensibility. That might be patents, maybe trade secrets, maybe some strong experience and market knowledge. It’s something that says your deal won’t be swamped by a big competitor if it starts to succeed.

4. They want a business that will grow fast and big with the input of their money, and will be able to continue growing with more money, so that in three to five years it offers the early investors cash out with some big deal like getting acquired. One of the lesser-understood facts of outside investors is they don’t make money with a healthy growing company that is cash-flow independent and doesn’t want to bring in more money to grow faster.

5. They want a business that’s already moving, not just treading water waiting for investment. That’s what experts mean when they say get traction, and what traction actually is depends on your specifics. It might be that you launch your site and get early subscribers, develop a prototype and test it professionally, or get the mobile app on the app stores and get downloads. Get users, get distributors, or get a few big early clients. Get moving.

Investors won’t invest in a questionable team, but even a good team is weak until they’ve gone from idea and plan stage to actually doing something. Investors invest in the work already done, proving credibility. Not just in what you say will happen in the future.

A fact of life is that investors don’t always tell the truth about rejection. I’ve seen many cases in which startup founders didn’t ask why their deal was rejected, or responded to early feelers wanting to argue back. Founders who react aggressively to questions during a presentation, seeming ungrateful or even hostile to doubts, will rarely get good feedback.

I’ve seen investors who feel the startup team is weak, inexperienced, or not likely to listen and learn, who don’t bother to tell those founders that because their attitude isn’t conducive. And I’ve seen investors invent some vague generality because they don’t want to get into awkward explanations of personality-related doubts.

For example, I was in a group that was pitched by a founder who blamed a supposedly incompetent attorney for one problem, and a supposedly dishonest partner for another, and an incompetent vendor for a third. Nobody wanted to deal with that man at all, not even to explain why not. He got no feedback.

All of which explains my suggestion that you ask specific questions, and, by the way, frame them well. Make them easy to answer. For example, don’t ask whether your investors doubted your team, but rather whether they would suggest adding another person with some other skill set. Ask them whether there was some additional information about your market that would have helped. Ask them how they suggest getting traction now, starting today. Ask them whether they think your idea is patentable, or can be protected by copyright or trademark. Ask them to give specific advice, based on possible problems. Make it a multiple choice question, not an open-ended question.

Consider the investor feedback very carefully, but don’t take it as gospel truth.

Don’t ignore the possibility that you are never going to get outside investment for your startup. You might have to proceed without it. That doesn’t necessarily mean you have a bad business. Lots of good businesses are not attractive investments for outsiders. The best of these are the ones that can grow and prosper as owner-operated businesses without requiring capital input.

Part 3: Set the right next steps

With diagnosis in hand, determine your next steps.

1. If you decide you have a good shot at succeeding with investment, make the right revisions. What you need to do next is determined by your diagnosis in part two. It might be adding to the team, refocusing your market, beefing up intellectual property protection, validating your business with early sales, or something else. You might also be looking for different investors, a different forum, or different investment amount.

2. If you didn’t already, do more homework on which investors to approach. Investors generally have preferences related to where they invest, in what industries, what amounts, and at what stage. Narrow your search down to investors more likely to be interested.

3. If your diagnosis indicates that you’re not likely to get investment, revise your plan. Focus on the parts of it most likely to generate early revenue. Think about bootstrapping. Revise your spending downwards. And ask yourself whether the revised plan can still fly. Don’t give up on bootstrapping if you have an opportunity to pursue. And if you can’t do it without investors, then drop it. Don’t continue blindly toward a goal you can’t achieve.

Please remember that most businesses start up without investors. If you really do have a  product-market fit, you really are offering a value that people want, and filling a need, then bootstrapping might work and you can build that company. And if you don’t, better to recognize the problems and move on.

Aspiring Startup Entrepreneur? There’s One Book You Should Read This Year

How to use your business plan

Aspiring Startup Entrepreneur? There’s One Book You Should Read This Year