A Good Answer in a Business Plan Contest

Scene: two MBA entrepreneurs in an almost-empty room, pitching to five judges in an MBA-level business plan contest. There’s a projector with PowerPoint, a moderator, a table of judges and just a few spectators.

One of the judges (me) challenges the entrepreneurs that their numbers–particularly the margins, meaning gross margin (sales less costs of sales) and profit before taxes (gross margin less operating expenses) are way too high.

“Is there any precedent for margins that high?” he asks. “Can you name a company in your industry that does anything like that?”

And, to the judges’ collective surprise, in this case the entrepreneurs are able to say yes, they do know of some. They mention the names, and add that their margins are taken from those and companies like them. 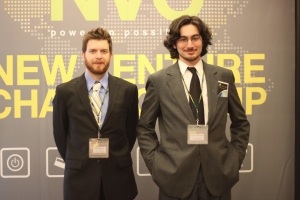 By the time I asked that question, my fellow judges were probably rolling their eyes, because I’d asked that of every other team in that track. All three of the others were strong business plans, with good product-market possibilities, strong technologies and strong management. But their financial projections were way too profitable: this problem, essentially, which I’ve posted about here before. Having unbelievable margins is a common error in the plans in these contests. And in this case, as I read the plan, I was sure this was another incident of that kind of error. But then they had a good answer to my question.

This is a true story. It happened last Friday in the semi-final round of the University of Oregon’s New Venture Competition, which was eventually won Saturday by a University of Louisville company named NanoMark Therapeutics.

As I already said, I was the judge in the story above. The business was Green Valley Solar, which ended up in third place, and impressed the heck out of the five of us tasked with judging that track. That’s the two of them in the illustration here, Seth Shumate and Stephen Ritterbush. They’re from the University of Arkansas. The business is built around scientific advancements that can greatly reduce the cost of producing solar energy cells. They’ve already won government approval, they’ve got patents, their team includes the scientists responsible for the technology, and the company has an exclusive license from the university. Good show. Very interesting business.

I didn’t see the winner or the second-place team (Mosaic Genetics from the University of Oregon) do their pitches, but they had to have been excellent. First, because they came out ahead of Green Valley Solar. Second, because I attended the final awards reception, talked to the judges, faculty advisors and contestants, and everybody seemed to be very comfortable with the final decision. So wow. That’s impressive.

Actually, I reviewed four fledgling companies for my judging duties on Friday, and all four looked like viable businesses. That’s a really good sign.