A Look at a T-Shirt Business Startup

Brent Bowers of The New York Times focuses on a would-be or wanna be T-shirt business today as he kicks off a series of three profiles on startup companies. To make it more interesting, he promises to revisit all three startups six months later and again after a year. That’s an interesting premise.

And, by the way, although you do have to register to read it online, The NY Times is free now, so you will be able to follow up with the later stories.

It’s not clear to me how this company was chosen, but I doubt it’s because of certain success. The piece seems to be a neutral reporting of what the founder is doing, with some expert commentary on the side.

TINA ERICSONâS new company, Mamaisms Gear, has not shipped any products yet, but she predicts that sales will grow rapidly to $100,000 next year, $1 million by 2010 and ultimately to tens or hundreds of millions of dollars.

The Web site for the venture in Wilmington, North Carolina, (www.mamaismsgear.com), 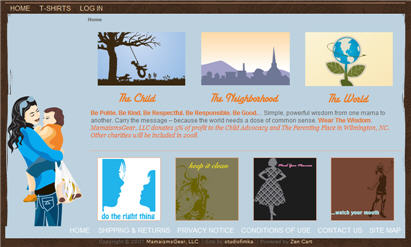 began Wednesday, and 1,200 T-shirts that arrived from a manufacturer in Turkey two weeks ago have been stamped with the âMama Saysâ? slogans and are ready to be shipped.

âHer projections seem based too much on wishful thinking,â? (Neal) Thornberry said. âShe has a great idea, but we donât know yet if this is a great opportunity.â?

My cynical side suspects Bowers may have chosen the company for likelihood of change in the degree of optimism as the real world rears its ugly head.

It should be illuminating to hear back from her six months from now on whether she has had to lower her expectations and, if so, by how much.

Right now, Ms. Ericsonâs expectations run high. She says she believes that Mamaisms Gear may someday become a household name and a force for good.

Mr. Thornberry of Babson College says she has more going for her than just her passion. âShe has a real job–a backup plan that allows her to play around a lot, and learn while she makes mistakes.â?

Even so, he saw it as a risky investment for now. For one thing, Mamaisms Gear appears to him âfragmented and unfocused,â? he said. âIf there is a unified theme, it seems to be, you can trust the Mamaisms Gear brand and advice. But it takes a long time to build trust in a brand.â?

Very interesting. There is a lot more detail in the source story, and I’m already looking forward to the others.