All You Need is Focus, Work, Value and Marketing 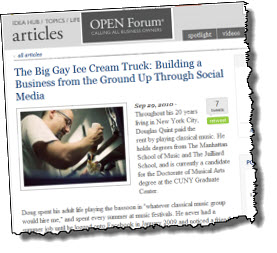 Ed Levine posted it yesterday on the American Express OPEN forum. How’s this for positioning:

“It’s boring to just have a regular ice cream truck. New York City is full of them, and they all do the same stuff. We wanted to create something special.” And so the Big Gay Ice Cream Truck was born.

Founder Doug Quint is a classical musician, with degrees from Julliard and such, working on his Ph.D. He plays the bassoon. But then he saw somebody renting an ice cream truck.

Yes, I know what you’re thinking: “What? Another ice cream truck in New York? Who needs it?”

Yes, but then there’s marketing . . . and a new world, lower barriers to entry, personalized marketing. Here’s what Doug and his partner Bryan Petroff did with the ice cream truck:

Doug and Bryan were new to food trucks, new to soft-serve ice cream, new to everything. They blogged about the journey: developing a brand, researching ice-cream topping ideas, obtaining a mobile food vendor license and bringing the Big Gay Ice Cream Truck to life. Readers felt like a part of the process because they really were. They weighed in, gave advice and watched Doug and Bryan’s vision unfold in real time.

And unfold in real time is what it did. The Big Gay Ice Cream truck is two summers old now, well-known and clearly successful. A new entrant in a crowded market, yes, but also a great example of what focus and identity can add to hard work.

Top 5 Online Marketing Tactics to Focus On in 2014

Top 5 Online Marketing Tactics to Focus On in 2014