Both Business Plan Pro and Marketing Plan Pro powered by Duct Tape Marketing stress the importance of understanding your target market. Who needs your products or services, and values them? What can you do for them that nobody else can? What factors drive their purchasing decisions, and how do you build and retain their loyalty? And just as important; who do you NOT want as a customer?

Assuming you’ve done your homework, or are already in business and know your customers very, very well, you then have the tricky job of re-working your product or service or brand or customer service approach (or all of the above) to most appeal to the people you really want to get and keep as customers.

You want these people to see themselves and their needs, or maybe their ideal selves, in every interaction they have with you, your company, your products, etc.

If you are selling high-tech gadgets to new entrepreneurs, you do not package it in plain brown wrapping paper tied with string, sent book-rate.

I was struck recently by the weird design choices that can result from a process (or perhaps a decision-maker) who was not clear on their target market. Back in July, Chris Ryan of The Apple Blog reviewed the history of some key apple icons.

He noted in passing that some applications “have also seen different icons with new versions.” He’s not kidding. The visual example he offers is for Apple Keynote, a presentation application.

Let’s take a closer look at what the icon history is showing about how Apple understood and tried to engage their target market. 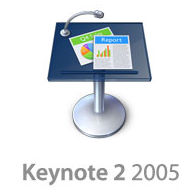 In 2005, Keynote 2 has a radically different iconography. Our translucent glass lectern now sits atop a polished metal base, the electronic component is more pronounced, and the contents of the presentation, rather than the structural features of the podium, are the focus. This is an icon aimed at the high-tech business person, presenting financial or marketing data in a corporate environment.

Well, Apple’s iPod had created a major buzz, even among PC users, a factor Apple took advantage of with the release of the Mac mini, aimed at getting PC owners to switch to Mac at little cost.

The ongoing Microsoft/Apple feud saw Apple winning out in design during this same year. As John Markoff of the New York Times noted in May, 2003, “Apple executives took obvious glee last week in noting that the software centerpiece of the Microsoft conference, new graphics software that is scheduled to appear in “Longhorn,” Microsoft’s 2005 version of its Windows operating system, apes features that have been in Apple’s OS X operating system since 2001.” (Longhorn was the working codename for Windows Vista, finally released in 2008.)

Since 2001, the general wisdom has been that PCs running Windows Office are the overwhelming default in corporate America, where IT departments want to standardize the proprietary software on their entire structure’s collection of computers. Apple, on the other hand, was for “cool,” leading-edge, personal use. The rogue employee with the Powerbook was invariably on the cutting edge of technology, compared to his desktop tower, PC cubicle-farm colleagues.

Apple’s Keynote 2 icon brings that leading edge, high-tech vision of the Mac user to the corporate boardroom. It presents a direct challenge to the notion that Microsoft Windows, and specifically PowerPoint, are the hallmark of a successful business presenter.

Keynote 4, released in 2007, is an unnatural muddle of the two target markets that were so beautifully, and so clearly, addressed by the earlier icons. They have retained the metal base, but it’s now topped by a plain wood platform. The microphone has shrunk again, and the presentation, now centered and squared, is in plain black and white.

Their new target market appears to be an aesthetically challenged accountant, sent at the last minute to present the quarterly report to a tech-savvy audience with whom he is not entirely comfortable. I can almost see him, nervously brushing his comb-over across his sweating pate in the glare of the stage lights…

So, was there new market research that told them this was, in fact, the high-growth market niche they wanted? Or did some desperate marketing executive tell the product development team they were losing their appeal to the academic market, and try to bridge both worlds without enough thought?

Lesson for your business – if you have two (or more) distinct market segments you are trying to serve, don’t confuse them. Don’t try to talk to one with the language or iconography of the other. Either come up with a single, coherent design and approach that speaks to both, or split your offerings and marketing materials so that your desired customers know for sure that you’re addressing them, and their needs.