Be Your Own Boss. Work Harder. Lose Sleep.

Are you ready to work? If you had any doubt about how much business owners work, the Staples survey of small business indicates that ninety-eight percent of U.S. small-business owners and managers are working during their time off–including nights, weekends and vacations–and nearly 54 percent expect to work even harder in 2008. 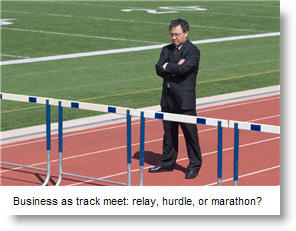 Other interesting results include:

I didn’t like the way Staples led with what it was calling “sleepworking,” as explained here:

According to the 2nd Annual Staples National Small-Business Survey, more than half of small-business professionals said that work has actually become part of their dreams. Fifty-one percent of those surveyed said that they “sleepwork” (i.e. dream about work), and nearly 70 percent of those “sleepworkers” report they wake up and put their “work dreams” to action.

I say that’s just silly. We get involved with our work; we like our work some days and hate it others, and dreaming is part of life, not just work. The idea of calling dreaming work just doesn’t make it. If you’re interested, I posted on that theme on Small Business Trends, and there is a lively set of comments attached to that post.

But enough of that. Here’s some more interesting data:

The results revealed organization and teamwork are the top factors why owners and managers are working so many hours. Nearly 70 percent admitted they do not have a written business plan. Almost three-quarters consider themselves organized, but only 33 percent said they complete the tasks on their “to-do” list each day. Slightly more than two-thirds said they feel constantly challenged by not having enough time to get work done and nearly 44 percent said customer fulfillment takes up the majority of their time while at work.

When asked to compare their businesses to a track and field event at the Olympics, a mere 14 percent said their business operates like a relay race, with everybody working in tandem toward the same goal, whereas 26 percent think of business operations as a 100-meter dash, always sprinting and trying to do everything quickly.