Paradox: Consistency vs. the Brick Wall

One of the more stubborn recurrent paradoxes in all business planning is the problem of consistency vs. the brick wall.

Consistency refers to a fact of life in small business strategy: it's better to have a mediocre strategy consistently applied over three or more years than a series of brilliant strategies, each applied for six months or so. This is frustrating, because people get bored with consistency, and almost always the people running a strategy are bored with it long before the market understands it.

For example, I was consulting with Apple Computer during the 1980s when the Macintosh platform became the foundation of what we now call "desktop publishing." We take it for granted today, but back in 1985 when the first laser printers came out, it was like magic. Suddenly a single person in a home office could produce documents that looked professional.

People might argue with this, but what I think I saw in Apple at that time was smart young managers getting bored with desktop publishing long before the market even understood what it was. They started looking at multimedia and other bright shiny new things, lost concentration on desktop publishing, and lost a lot of market potential as Windows vendors moved in with competitive products.

The brick wall, on the other hand, refers to the futility of trying to implement a flawed plan. You've probably run into this problem at times. People insist on doing something "because that's the plan" when in fact it just isn't working. That kind of thinking has something to do with why some Web companies survived the first dotcom boom and others didn't. It also explains why some business experts question the value of the business plan. That's sloppy thinking, in my opinion, confusing the value of the planning with the mistake of implementing a plan without change or review, just because it's the plan.

This consistency vs. revision paradox is one of the best and most obvious reasons for having people -- owners and managers -- run the business planning, rather than algorithms or artificial intelligence. It takes people to deal with this critical judgment.

One good way to deal with it is focusing on the assumptions. Identify the key assumptions and whether or not they've changed. When assumptions have changed there is no virtue whatsoever in sticking to the plan you built on top of them. Use your common sense. Were you wrong about the whole thing, or just about timing? Has something else happened, like market problems or disruptive technology, or competition, to change your basic assumptions?

Do not revise your plan glibly. Remember that some of the best strategies take longer to implement. Remember also that you're living with it every day; it is naturally going to seem old to you, and boring, long before the target audience gets it.

Every small-business owner suffers the problem of management and accountability. It's much easier to be friends with the people you work with than to manage them well. 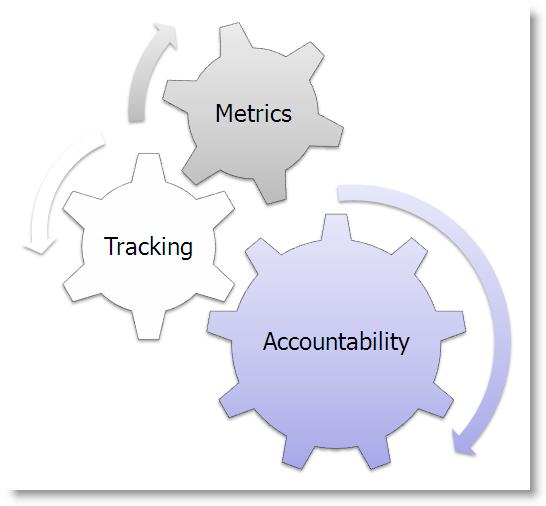 Correct management means setting expectations well and then following up on results. Compare results with expectations. People on a team are held accountable only if management actually does the work of tracking results and communicating results, after the fact, to the people responsible.

Metrics are part of the problem. As a rule we don't develop the right metrics for people. Metrics aren't right unless the people responsible understand them and believe in them. Will the measurement scheme show good performances and bad performances?

The metrics should be built into the plan. Remember, people need metrics. People want metrics.

Then you have to track. That's where the plan-as-you-go business plan creates a management advantage, because tracking and following up is part of its most important pieces. Set the review schedules in advance, make sure you have the right participants for the review, and then do it.

And you must avoid the crystal ball and chain (see the next section). Sometimes -- actually, often -- metrics go sour because assumptions have chained. Unforeseen events happened. You manage these times collaboratively, separating the effort from the results. People on your team see that and they believe in the process, and they'll continue to contribute.

This is an answer to a question I get way too often. I call it the crystal ball and chain problem. I've run into it several times as I've introduced the planning process into a new company or organization.

People in the organization sometimes fear business planning. In the background, the fear is related to accountability and commitment. Usually they don't realize it. They state their objection like this:

"But how can I possibly know today what's going to happen six months from now? Isn't that just a waste of time? Can't it actually be counterproductive, because it distracts us, and we spend time trying to figure out things in the future?'

I've heard this from some people who really did seem to be worried about accountability and commitment, and I've heard it from some who were stars on the team, not worried at all about their own position, but legitimately worried about the best thing for management and getting work done. 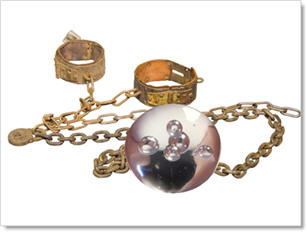 The answer is that projecting future business activities isn't a ball and chain at all, because in the right planning process the existence of the plan helps you manage effectively.

Here's a concrete example: It's September and you are developing your plan for next year, which includes an important trade show in April. You plan on that trade show and set up a budget for expenses related to that trade show. Even though it's September, you have a pretty good idea that this will happen in April.

When January rolls around, though, it turns out that the trade show that normally takes place in April will be in June this year. Does that mean the plan was wasted time? Absolutely not! It is precisely because you have a plan running that you catch the change in January, move the expenses to June, and adjust some other activities accordingly.

In this example, the plan isn't a brick wall you run into or a ball and chain that drags you down; no, it's a helpful tool, like a map or even a GPS (global positioning system) device, because it helps you keep track of priorities and manage and adjust the details as they roll into view.

It's normal for the crystal ball and chain to appear as an objection when a planning process is introduced. The solution is simply good management. The people involved in implementing the plan learn with time how regular plan review sessions help them stay on top of things, and when assumptions change, how the plan changes. Changes are discussed, nobody gets fired, and you have better management.

The underlying idea here is directly related to the paradox I mentioned earlier: business plans are always wrong, but they're still vital to good management.

(Adapted with permission from blog.timberry.com)

I was caught on a plane once with the One Minute Manager book, by Kenneth Blanchard. I recommend that book, it's easy to read -- about one short plane ride's worth -- and easier to absorb. And I feel like it boils down to setting expectations with people and then following up, afterwards, with reviewing performance against expectations. You can add a lot of padding around that basic idea, but essentially it's one of those obvious ideas that's easy to say and hard to do.

Your plan-as-you-go business planning process can become a really valuable way to make that idea real, in your business, and part of your management. What I've found through the years is setting expectations and following up is one of those basic principles like, say, healthy diet and regular exercise. It's easy to understand, everybody agrees that it's good to do, but not everybody manages to make it happen. It's a matter of actually doing what we know we want to, what we know we should.

Honestly, in my years as a company builder, it was really hard to follow up. I think it's a natural process that you end up liking the people you work with, and, as business owner, you tend to work shoulder-to-shoulder. They aren't direct reports or subordinates, in your mind; they are John and Teri and Vie and Cale. They become friends.

So, in the plan-as-you-go world, that need for setting expectations and following up becomes part of the process. Your plan includes the metrics people need so they can know how they're doing. The core of management follow up happens because you have a forum, a comfortable place for that hard-to-do follow up. Your plan is built on metrics for your people, and you look at those metrics regularly. Following up gets easier.

It's a lot like the legendary farmer's axe, that has had its handle changed four times and its blade changed three times, but it's still the same axe. 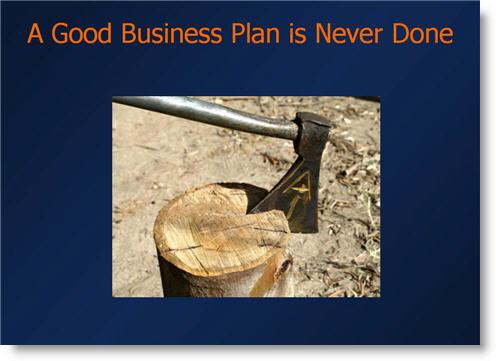 As your company gets used to the planning process, the business plan is always a work in progress. It gets a big refreshment every year, and a review and course correction every month.

Every so often, as business plan events come up, you spin out of your business plan a formal output piece, whether it's a pitch presentation, an elevator speech, or a full-fledged formal business plan document.

But that's not the plan, that's just output. It's the latest version. But the plan goes on, like steering, walking, dribbling, and navigation.

Don't ever wait for a plan to be done. Get going.

It's a simple statement: all business plans are wrong, but nonetheless vital.

All business plans are wrong because we're human, we can't help it, we're predicting the future, and we're going to guess wrong.

But they are also vital to running a business because they help us track changes in assumptions and unexpected results in the context of the long-term goals of the company, long-term strategy, accountability, and, well, just about everything the plan-as-you-go business plan stands for.