Copyright, Copy Right, Protection or Not

I just listened to Johanna Blakley’s Lessons from fashion’s free culture on TED.com, talking about how the fashion industry survives without copyright protection. 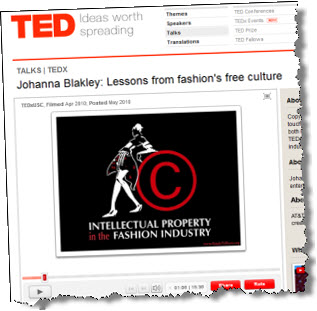 Fashion designers have trademark protection, but not copyright. The courts decided clothes are utilitarian, so there’s no copyright.

Lots of industries don’t have copyright. Food dishes, recipes, auto body sculpture, tattoos, and many other so-called utilitarian things don’t get copyright. Not even comedians get copyright. They can steal each others jokes.

But wait a minute: books, movies, television shows. They copy each other all the time, don’t they? Detective shows, reality shows, sports movies, buddy cop movies. How many times have you seen the one where the misfit kids get together and win the league right at the end, stealing the championship from the snobby kids? And yet films are copyrighted.

And software? Software code and even look and feel can be copyrighted, but it gets copied all the time anyway. Not just copied as in pirate copies, but copied as in how much one publisher’s version looks like another publisher’s. I’ve followed spreadsheets for years, and what started as Visicalc became Lotus 1-2-3 and then Microsoft Excel. The same thing, basically, but better.

In writing, I copy people I like to read. In athletics, I’ve seen for years how the younger kids copy the older kids, and get better. It’s what we humans do. Copying is the sincerest form of flattery.

In her talk (the link above) Johanna Blakely suggests that the way the fashion designers live without copyright might give us a hint for other industries. She tells the story of a prestigious fashion designer asked about the cheap knock-offs. The answer: their buyers aren’t in our market.

I can deal with all of this copying as part of innovation and creativity. Software I’ve done has been copied a lot, and I can live with that. Mine has to be better to survive, and if it isn’t, well, tough. What I hate though, is:

So there. Most copying is legal. Stand on your competitor’s shoulders, do something better, and it’s called fashion or creativity or style or something like that, maybe even progress. But don’t say somebody else’s work is your own. And don’t say that copying packaging or tag lines or slogans or pitches is anything but just copying. That’s bad karma, if nothing else.