Could This Be You, Insulting Your Customer? 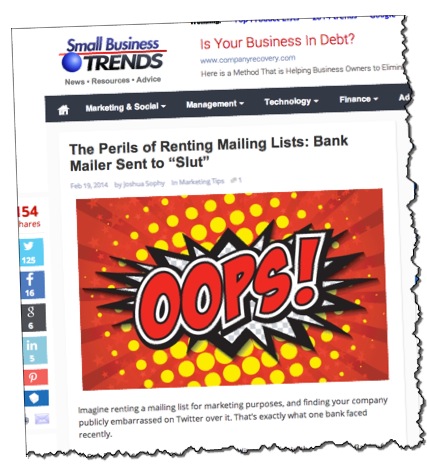 It’s a funny story, yes; and the Lisa in question is a freelance writer who’s dealing with it well. It gave her a quick name recognition bump.

To me it’s also a reminder of the strange, wondrous, sometimes funny, sometimes dangerous, but pretty much unavoidable mix of human interaction, human thinking, and automation. The big “Oops” comes with the process.

Big data, mailing lists, marketing automation … I dealt with some very early rules-based artificial intelligence software in the early 1980s, and with some early marketing automation in the late 1980s. It’s the allure of getting repetitive tasks done easily, fighting with the need to check things, customize, and personalize.

A lot of this is about letting go. Grab the task automation or go crazy keeping control of all the details.

Although nobody knows for sure, it’s not hard to guess how this happened. The mail list the bank used was several years old, and came from an honor society. The middle name was changed between six and 10 years ago. There were apologies. We all imagine that moment, many years ago, when somebody added that malicious little comment into the data field for the middle name. An unhappy ex? Jealous dorm neighbor? Or maybe just nasty little pieces of data ending up in the wrong field in the wrong record of the wrong data.

But here’s the thing: as we all deal with massive amounts of data, we either let it go or die trying to deal with every detail.