Crowdfunding? Yes, Maybe, No. Not Yet. 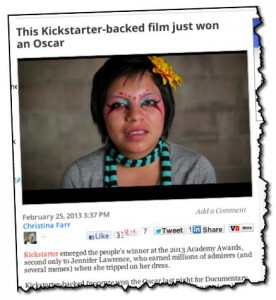 Great news: a Kickstarter-funded film won an Academy Award last Sunday. I like Kickstarter myself, I’ve participated in three deals there now. It’s a great place to raise funds for a film, book, game, software app, food product, and some other things that can be pre-sold to buyers willing to pay now for stuff they’re going to receive later.

But still, we need a reality check:

The good news is that KickStarter is working for lots of Startups. No, it doesn’t let you get equity investment in your startup. But the best financing is sales. And Kickstarter, when it works, is an opportunity to test an idea by selling it to people who promise to buy it when you can deliver.

And the bad news is that it’s still illegal to offer investment over the web to anybody who accesses your page. Or make offers in Twitter, or Facebook.  The SEC rules about accredited investors and broadcasting investment offerings still apply.