I picked this up from the Business Insider Chart of the Day email list from last week. I like the detail here. As Facebook grew, founder Mark Zuckerberg traded share of ownership for investment money. 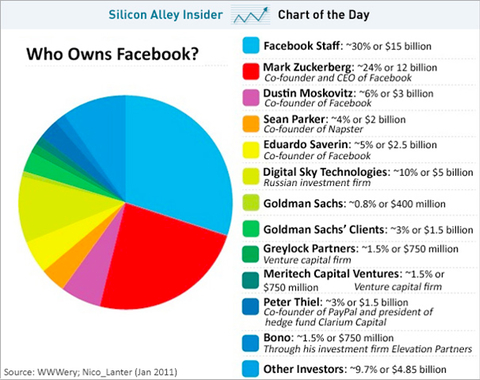 You’ve probably seen a lot of discussion lately about Facebook’s $50 billion value. It’s not a theoretical value of an expert’s guess, it’s a simple math calculation from the last real transaction. Goldman Sachs paid $400 million for 8/10 of one percent (.008 of the company, also called 0.8%). You can do the math here: divide 400 million by .008 and you’ll get 50 billion. And that most recent transaction is what tax code sets as the value.

The debate about real value is all guesswork. Did Goldman Sachs pay too much? Is Facebook really worth $50 billion? Will the investors who bought in at the Goldman Sachs $50 billion price make money? Time will tell. And sometimes these valuations are a bit like musical chairs. Investors can make money if later investors pay a higher price, whether or not the company is really worth it. Worth, called valuation when we talk about startups, is what somebody will pay for something.

You’ve seen ups and downs in major stocks and house prices, and in those markets it’s obvious. Will Facebook’s value increase? Microsoft and Google are each valued at several hundred billion.

This chart shows how founders’ ownership gets diluted as a successful startup collects investment through various rounds. Mark Zuckerberg now owns 24 percent of Facebook. Another 30 percent is set aside for other employees. Similarly, Google co-founders Sergey Brin and Larry Page own between them about 20 percent of Google. Bill Gates owns about 40 percent of Microsoft. And these are enormously successful companies with brilliant founders. A lot of founders end up with single digit percent ownership, after all the investment dilution.

Another interesting note is that the owners shown here can’t trade that ownership for real money yet. That happens only after the stocks are registered and set to be traded on a public stock market. Until then, the holders live with a lot of legal restrictions. Option holders often sign agreements limiting their ability to trade stocks. And the Securities and Exchange Commission (SEC) has some serious restrictions on selling this stock.

And my last thought on this subject: everybody involved in this has a big win right now. Mark Zuckerberg can’t just walk away with $12 billion dollars, but he’s already shown he can have his cake and eat it too, living very well without converting any more than tiny pieces of his ownership. If you followed the detail presented in the The Social Network movie, Eduardo Saverin has five percent ownership, so he’s okay. And those twins? They’re complaining about $60 million. It’s hard to feel sorry for any of them.

Ownership Shares and Your Business Plan