I’m sorry I’m late on recommending John Jantsch’s “These Jobs Ain’t Coming Back” on his Duct Tape Marketing blog. Better late (he posted July 2) than never, though, because it’s important. 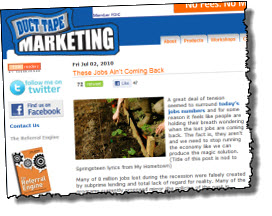 John doesn’t talk about larger political issues very often, because he’s usually immersed in tools, techniques and practical ways to help real people in real small businesses get their marketing done. So when he does, it’s probably worth reading.

The key to this post is a bit of a reality check, perhaps mixed with a dose of cold water:

Many of 8 million jobs lost during the recession were falsely created by subprime lending and total lack of regard for reality. Many of the programs currently proposed mirror the policies of the past in attempts to spend our way to creating thousands of jobs in sectors that probably can’t sustain long-term job creation.

He follows with this:

Which means, he adds: “invest in small business.”

And, as he explains, that means local development agencies should be given the resources to promote what John and others call economic gardening: nurturing startups and small business. I’m glad he’s focusing on what I consider the front lines of small business, the local development agencies. Not that these aren’t also federally funded to some extent. The SBA funds valuable resources such as Small Business Development Centers, SCORE and Women’s Business Centers, etc.), but the focus isn’t large-scale political fighting between the innies (Democrats) and the outies (Republicans). It’s just getting things done. Nurturing small business: The government can’t really do it because it’s about the individuals, the entrepreneurs and existing small businesses–but the government can help.