Ever Wonder Why Startups Choose Such Weird Names? 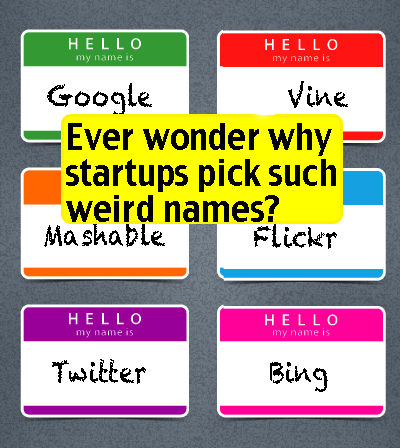 It started in the 1990s with “Google” and “Yahoo” (which, if you didn’t know, named themselves after a misspelling of the huge number “googol” and an acronym for “Yet Another Hierarchical Officious Oracle”, respectively).

Next came Twitter, Flickr, Tumblr, Yelp and Bing. And now we’re meeting Spotify, Vine, Airbnb, Giphy and countless others with quirky names that don’t have much to do with the product or service the company sells. A quick scan of TechCrunch or Mashable (themselves sporting strange names) will turn up names like Rovio (which syncs games across various devices), Uber (a high-end car-share and driver service) and Umano (which reads articles aloud so users can listen to news while driving or working out).

So what’s the deal?

According to The Wall Street Journal, the “deal” is the internet. Specifically, a lack of available dot-com domain names:

The reason, they say, is that practically every new business—be it a popsicle maker or a furniture retailer—needs its own website. With about 252 million domain names currently registered across the Internet, the short, recognizable dot-com Web addresses, or URLs, have long been taken.

The only practical solution, some entrepreneurs say, is to invent words, like Mibblio, Kaggle, Shodogg and Zaarly, to avoid paying as much as $2 million for a concise, no-nonsense dot-com URL.

The rights to Investing.com, for example, sold for about $2.5 million last year.

If you own or are starting a business, you know how hard the naming process can be (the co-founders of musical storybook startup Mibblio told the Journal that theirs was “the length of a human gestation period” but even “more painful”). It’s not uncommon to settle on the perfect name and then discover that the dot-com URL is taken, and either in use by another business or selling for $10,000 or more.

So companies like Flickr and Tumblr drop a vowel, and companies like Groupon, Facebook and WordPress mash-up words to create a new one. Others turn to foreign languages—”Mibblio” is a mash-up of “music” and “biblio” (Latin for “book”).

I’m surprised that the trend hasn’t trickled down to smaller, more localized businesses. Why are new restaurants choosing websites like “annies-kitchenpdx.com” instead of opting for a quirky name that lands them a solid web address? Will we see restaurants with names like “Choppd” in the future, or are tech startups just different?