Failure Is An Option 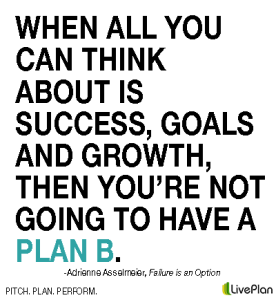 I live on the internet because of my profession, and I see business trends come and go. Lately, the hot topic has been failure. It seems like everyone is suddenly willing to admit the ways that they’ve failed, and they’re encouraging other entrepreneurs to fail, too. On the surface, this sounds like a terrible idea—who wants to fail? What is it about failure that make it such an appealing topic for entrepreneurs? What is the value in attending a failure workshop where successful people talk about colossal failures?

Entrepreneurs tend to have some similar traits: they’re passionate, motivated, and more often than not have type-A personalities that fit well with their drive for success. I imagine that having a high-strung personality that often accompanies overachievement is what  makes it so hard for the typical entrepreneur to accept—or even consider—failure. When all you can think about is success, goals and growth, then you’re not going to have a Plan B. In actuality, the headlines that I’m reading about how “I failed and you should too” don’t mean that people should set out to fail; they mean that you should always realize that it’s possible to fail, and that you can be prepared to deal with potentially business-killing scenarios.

As a small business center, we frequently encounter new business owners who, when asked, have never thought about what they will do if their business encounters a problem. What if sales don’t grow as projected, or your service doesn’t gain popularity, or if funding falls through? Not having an answer is a problem. Instead of proclaiming that you’re not afraid to fail, it’s important to contemplate challenges you may face, how you will handle them, and what you will do if ultimately you do fail. If you’re prepared for failure as an option, then you won’t end up in the gutter because you will be vigilant and flexible while still working toward your business goals.

So don’t jump on the fail train just yet. Use the possibility of failure as a motivator to be prepared for all possibilities. If you’re not sure of what to look out for, and what could cause your business to fail, look for a mentor or business counselor who can give you an idea of what problems commonly sink businesses. Then, if you’re ever faced with one of those problems, you’ll have a better idea of how to avoid crisis.

Adrienne “Dren” Asselmeier is the Director of Marketing and Communications at Grand Rapids Opportunities for Women, a Small Business Administration Women's Business Center in West Michigan. Dren has a Bachelor of Arts in English Language and Literature, and is a writer, runner, over-achiever, and friend to everyone. She likes to write about tips for small business owners, women’s issues, and workplace wellness.