With all the talk surrounding the landmark book Free by Chris Anderson, I want to recommend Steve King‘s post “Free isn’t a Business Model, But it is a Business Strategy” on his Small Business Labs blog. 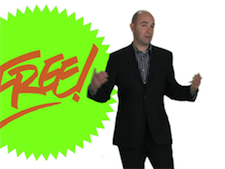 I’ve followed the Free controversy myself, and posted about it here on this blog, and  here on the Huffington Post, when two of my favorite authors, Malcolm Gladwell and Seth Godin, squared off about it a few months ago. Gladwell essentially hated the idea, and Godin declared it here whether we like it or not.

If I had to choose one short description of the basic idea, it would be this paragraph from Anderson’s 2008 story in Wired:

Once a marketing gimmick, free has emerged as a full-fledged economy. Offering free music proved successful for Radiohead, Trent Reznor of Nine Inch Nails and a swarm of other bands on MySpace that grasped the audience-building merits of zero. The fastest-growing parts of the gaming industry are ad-supported casual games online and free-to-try massively multi-player online games. Virtually everything Google does is free to consumers, from Gmail to Picasa to GOOG-411.

King has a gift for summary. He says in his post:

Free has been used effectively as a business strategy and marketing tactic for pretty much as long as businesses have existed. Given how widespread and successful free is and has been, I don’t see how you challenge the concept.

King goes on to point out several examples. He also points out that it could be tactic, strategy or something else. And it’s not that new an idea, either (Chris Anderson would agree with all three).

Are you looking at using a free offer as part of a business plan? You’ll have good company. I do hope, though, that you define for yourself the specific business objectives (traffic, visibility, whatever) and put in some metrics so you can measure results.

Hear more about content marketing with Joe Pulizzi, founder of the Content Marketing Institute, on the eleventh episode of The Bcast, Bplan’s official podcast (at 14:02):
Click here to subscribe to The Bcast on iTunes »