Kelly Spors had a nice story in The New York Times the other day, called “A Small Player Breaks Into Starbucks”. It’s a good story. 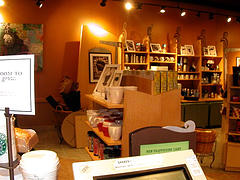 It’s also accurate. I know, because in my early days of Palo Alto Software, we broke into the office stores, computer stores and superstores retail channels. And it was hard to do.

Many entrepreneurs dream of placing their products with major retailers. But it can be a tough sell for small companies without a well-known brand name.

That’s putting it mildly. A lot of retail is under siege right now, threatened by a bad economy and changing business landscape. The last thing retailers need is new products (What? Did I just write that? Is that as bad as it sounds?). And even 15 or so years ago, when we managed to get in, it took a lot of calling, new packaging and a knowledgeable sales professional.

“The primary motivation of any big retailer is to get more dollars per square foot,” says H. David Hennessey, a marketing professor at Babson College in Wellesley, Mass. “You have to show them very clearly and effectively how you can achieve that for them.”

Big product makers have a clear advantage, Professor Hennessey says, because they can usually offer multiple product lines at lower prices and already have inventory management systems in place. Smaller companies must compete on price with major brands but also be unusual enough to make them worth the retailer’s investment.

Just getting that first meeting can be a challenge. In 2003, Tom Szaky, co-founder of a startup, TerraCycle, which sells fertilizer made from worm excrement, dialed up Wal-Mart’s fertilizer buyer every day for three weeks straight until the buyer finally answered his phone.

Knowing he had just a few seconds to win him over, he told the buyer he had developed an ecologically friendly fertilizer that is cheaper to produce than the major brands. Intrigued, the buyer invited him to Wal-Mart headquarters in Bentonville, Ark., where the buyer agreed to give TerraCycle a shot.

Actually, it’s not that retailers don’t want new products. It’s that taking on a new product is a lot of risk in a business that measures every variable it can find on sales performance on the shelf. There is very little room for error and not much incentive for experimentation.

And then there’s the packaging. Ah yes, packaging. Critical for retail. Dull, unattractive packaging on the retail shelves nearly killed our company in 1993.