Go For the Gold: Olympic Lessons for Entrepreneurs 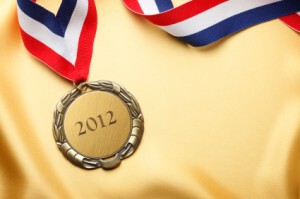 With the opening ceremonies of the 2012 Summer Olympics, fans all over the globe will be glued to the TV watching sports we rarely see televised (fencing, anyone?) and cheering on athletes we’ve barely heard of (except for the men’s basketball team, maybe).

In the broadest sense, Olympic athletes are small business owners. An athlete is their own product and their business is to be the best in the world. They must also manage their schedule, build relationships with sponsors and teammates and be part of a community.

An athlete doesn’t consider a personal record (or PR) a static point in time. Every time he or she achieves a PR, a new one is immediately set. As an entrepreneur, success comes from stretching just a little farther than you think is possible. When you achieve one goal, immediately set another. Having that clarity about the desired outcome keeps you focused when everything else can feel like it’s in flux.

For an Olympic athlete, the demands on their time outside of training seem to have no end: appearances, the needs of teammates, media requests, family obligations… the list goes on.

Gold medalist, Christine Rampone, the captain of the US Women’s Soccer team offers this in a recent Inc. article:

When the athletes come to me with ideas or problems, I have to weigh each and prioritize. Same goes for business: You can’t just take on everything from everyone.

For an entrepreneur starting out , it’s hard to say no, especially in the beginning. Sure, we can fill that order faster. Yes, we can donate to your charity. Absolutely, we can offer our service at a discount to earn your business.

Saying “yes,” isn’t always a bad thing, of course. But take time to think about how the request (and filling it) will help your business achieve its goals. Will the request distract from building your business? Is saying yes a strategic step to achieving your desired outcome?

The life of an Olympic athlete can be unpredictable. Something you work toward for a very long time can evaporate before your eyes.

I recently had a conversation with a friend whose husband is an Olympic-caliber sprinter. His competition time fell just short of the qualifying him to compete in the Olympic Trials in Eugene, Oregon this summer. She said he was disappointed, but was ready to train for the next Olympic games. Just like that, he had a four-year plan for himself and a renewed focus on his goal.

World class athletes endure ups, downs, wins and losses all for the love of the sport and the focus on winning.

As an entrepreneur, you also must be able to adjust and take the highs and lows in stride. The ability to be flexible and agile and adapt to changing circumstances sets the successful small business apart.

It shouldn’t be surprising that many Olympic athletes are small business owners and entrepreneurs outside their sports. Many of the skills that propel athletes to success also serve them well as entrepreneurs. But even if you’re not going for the gold in London, you can take away some lessons to make your business world class.

Kelli Matthews is an instructor of public relations at the University of Oregon's School of Journalism and Communication, she owns marketing and PR firm Verve Northwest Communications and is a "mama-squared." Her and her partner just welcomed baby number 2 in May 2012. He joins his big brother (age 6). Find her on Twitter at @kmatthews or via email at kelli@paloalto.com.