This is a particularly hard post to write. I’d rather be right than wrong, and I’d rather have the startups I blog about go straight up instead of up and down and backward and around. 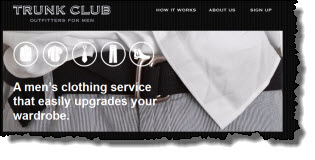 But the up and down and (I hope) back up again fate of the Trunk Club is something I contributed to by writing about it. So I need to give you an update. My assessment was wrong.

Wrong? Yes, I’m afraid my bias got the best of me. It shows up clearly in what I wrote in February of 2009:

I’ve posted on the Trunk Club‘s success story on this blog before, and I wrote about it in my Plan-As-You-Go Business Plan book, too. I have an obvious bias. Founder Joanna Van Vleck, still only 25 years old, is a survivor of my “Start Your Business” class at the University of Oregon, just four years ago. Like anybody else who teaches entrepreneurship, I love it when one of my students makes it big.

It seemed like a great idea well implemented. Members dealt with consultants using Skype, ordered clothes with the comfort of an adviser and personal service, but didn’t have to go to the store. Clothes arrived a few days later. Returns were easy. The Trunk Club itself made retail margins without charging more than retail prices, but without the normal fixed costs of retail. Leverage and scalability were based on a network of entrepreneurial consultant/stylist/salespeople, all linked virtually. It sounded really good to me.

Which reminds me of a moment when I was guest speaking at the Haas School in Berkeley, listening to professor/entrepreneur Jerry Engels tell his class: “Always look for the fatal flaw.” It’s a good lesson. And the fact that the Trunk Club is alive and well, moved to Chicago, and now growing and profitable–that, too, is a good lesson. Things have to change. Plans need to be revised.

As it turns out, 18 months later, the Trunk Club wasn’t nearly as successful as I had indicated on this blog, on my main blog, and in my last book on business planning. Joanna is no longer involved. And it’s now owned by Anthos Capital and run by CEO Brian Spaly from its new headquarters in Chicago. The investors found it spectacularly less successful than what they (and I, with my posts) had thought. I don’t know what really happened. And I don’t want to get into blaming or judging in this post or on this blog, but there were legal problems, and it was messy. I like the people involved, on both sides, so that’s as far as I’m going into that here.

I caught up with Brian Spaly at a Princeton event a couple months ago, and talked with him a few days ago to research this post. And I’m very glad to report that he says the new Trunk Club is working. Two weeks ago Brian told me sales were growing about 20 percent per month, it was just about to close on a new round of investment, and it is working with a positive gross margin, looking to continue improving the essential numbers of the business.

But it wasn’t easy. The business model I thought was so great wasn’t actually working when Anthos took it over and dug into the details. Brian says it had several flaws.

The first flaw was inventory. In theory the Trunk Club didn’t have to carry inventory, because it was doing instant just-in-time ordering with the suppliers instead. In fact, though, that wasn’t working. The new Trunk Club is investing in inventory to enable immediate shipping for as many of its standard items and sizes as it can. Previously, the flow from customer order to supplier order to shipping to Trunk Club to repackaging and reshipping was taking way too long. So that means the new Trunk Club has to deal with the related financial burden and cash flow and capital drag related to inventory.

Another flaw, Brian says, was the network of entrepreneurial style consultants working with the customers. The new Trunk Club has professional salespeople with experience in clothing sales, online sales and men’s clothing. Brian told me that, with just a couple of exceptions, the style consultants in the network, who had paid the Trunk Club fees to join as consultants, weren’t making the money they’d expected. And, more important, they weren’t serving the customers effectively. The new Trunk Club has full-time paid clothing industry veterans dealing with the customers, which, Brian says, is working much better.

So there you go: I had it wrong, but life goes on, and the Trunk Club goes on, too. A business that doesn’t change is going to die.