Google Glass Exploring (The tweet that cost me $1,500 and counting) Part 1 of a Collection

I was minding my own business plans when the iOS notification came chirping in:

First a StartupBus, now this BS?  From bus-preneur to glass-explorer?  You’ve gotta be kidding me.  And why me?  And how can I play with this ‘Glass’?  I will in fact blow some Glass for you today… and what better way to begin than to quote fellow Chicagoan and startup icon Ferris Bueller while on on his day off:

“The question isn’t what are we gonna to do today, it’s what aren’t we going to do today.”

That’s how I feel about Google’s new wearable computing device Glass. When I get asked “what are you gonna do with Glass” I simply say “What aren’t we gonna do with it?” 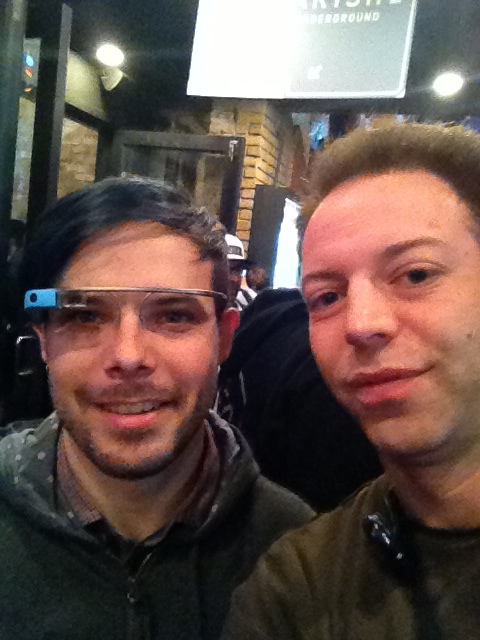 I say “we”, because I’ll be taking the BPlans readers along for the ride as I take on the world in my new spectacle frames.

This Glass that I receive will be treated like the Stanley Cup … everyone gets to drink champagne from it.  Our wildest dreams, resting upon our noses.

If you have ideas for how to play with Glass please tweet me with the hashtag #playwithglass.

If you have a few moments to see the future of wearable computing, today I will tell you a bit about the Glass that shall soon be resting upon thy nose.

But first, I ask you to Back That Glass Up as I explain how I became a Glass Explorer…

It was a cold chilly February 20th day in the Windy City, I flipped the YouTube app on my AppleTV to watch Reggie Miller’s 8 points in 8.8 seconds against Spike Lee’s Knicks in the ’95 playoffs. What a work of art. In comparison, I myself had sheepishly made just 8 tweets in the past 8 months.

One of those tweets was congratulating my co-founder, best-friend, and brother for leaving me and moving to Seattle after taking an offer he couldn’t refuse from Amazon.com’s Publishing Division. I knew I had to stop procrastinating and start shipping something, anything.

So I dusted off the old tweet deck when I saw all these tweets beginning with the hashtag #IfIhadGlass on my leaderboard. 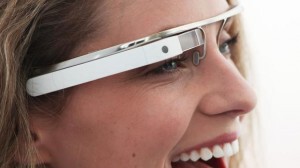 Google Glass, that is. The Geek Goggles that every uber-nerd from here to Tokyo wanted to get on their nose.  Tweeters everywhere were hashing #IfIHadGlass followed by what they would do if they had wearable computing hardware.

My imagination meshed with reality as I immediately wondered what it would be like to arm athletes with the glass, and watch them play sports through their eyes.  That’s when the floodgates opened for me.

What if Spike was wearing Glass right back at Reggie?!? 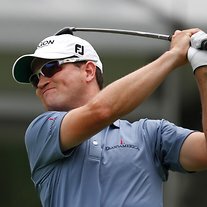 I tried to distract myself back to reality by digging through DropBox on my iPad for some old golf Masters Tournament footage. (Different folks, different strokes).  I searched for 2007 and the cloud stream came via AirPlay directly to my AppleTV in all it’s glory – the midwesterner Zach Johnson slippin on The Green Jacket.

ZJ already wears glasses while he plays in tournaments. Why not play Golf with Glass in the future?

By now I can’t stop thinking about it.  I’m a tech-junkie totally hooked.  I had to do something, and so I quickly shipped some art at far fewer than 140 characters. 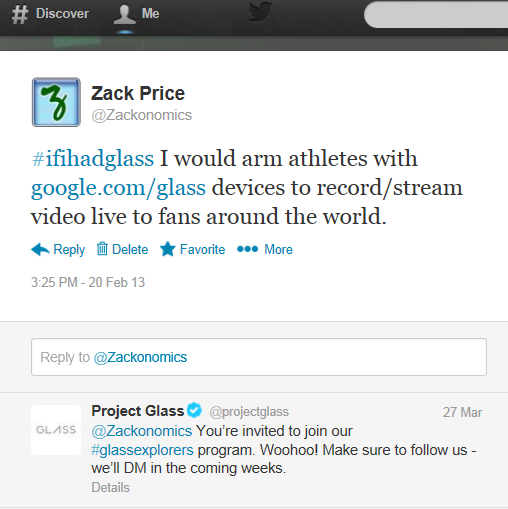 So now I’m out $1,500, plus tax, and a round-trip flight with a date to be molested by the O’Hare TSA security crew.  Story of my freakin’ life.

Click here to check out Part 2 of this collection.