How Do Your Neighbors Spend Political Money?

I’ve just spent time exploring in a new dimension — political donations mapped into blue and red flags on a U.S. map. You can drill down into your city, your neighborhood. Donations to Democrats are marked in Blue and to Republicans in red.

This is at the Huffington Post’s new Fundrace 2008 Campaign Donations..

Interesting how the political money map matches some real-world general folklore and wisdom. For example, look at Oregon, which has two mostly-liberal Democratic cities, Eugene and Portland, surrounded by rural red Republican cites. How well does that show up on the map.

New York City, predictably, is so mixed it seems to turn purple. Also, we don’t really see the map coming out nearly as cleanly red states and blue states.

What’s interesting for this blog, about startups, isn’t strictly the politics of it — although I find that fascinating — but the use of readily available technology to tie public information about political campaign contributions onto a map. 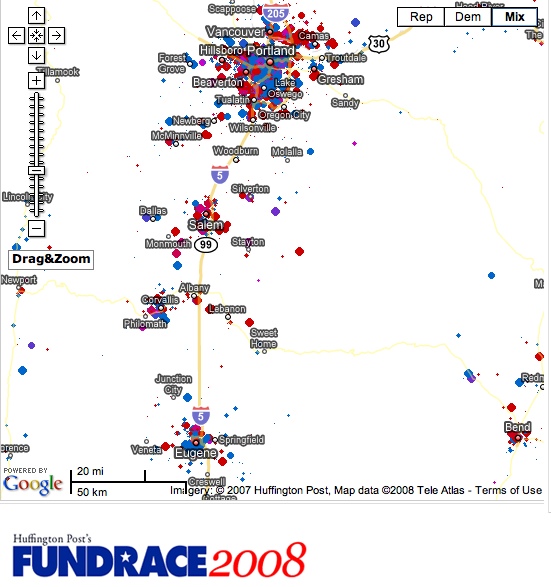