How Traveling Helped Me Prepare for Startup Life 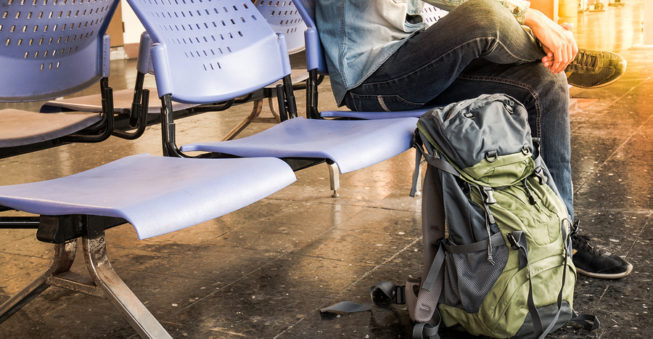 If there’s anything that traveling outside the U.S. taught me, it was how to adapt.

Unless you can afford to build a bubble around yourself that keeps things exactly like they are at home (which some people do, I guess) travel is a series of surprises and new information that you need to constantly react to.

As it turns out, this is very similar to the experience of working at or founding a startup company. Often times you don’t have any idea what you’ll be doing from one day to the next, and how you learn to react to the constant stream of new information can be the key to success, or at least enjoying your time at a startup.

See Also: 5 Things Entrepreneurs Can Learn From Traveling the World

Finding out just how little I knew

The lessons in adaptation travel gave me were frequently combined with lessons on just how much I didn’t know.

I remember landing in Santiago, Chile on my first ever trip out of the U.S. in 2004. I had taken Spanish in high school, and my wife and I had read not one, but two guide books. So we were totally prepared, right?

It was January, and we’d just left a freezing winter in Chicago. We were excited for warmer climates, not realizing that the heat of Santiago in January is as much of a slap in the face as the Windy City’s icy blasts.

We got off the plane and were instantly sweating. There was a hustle and bustle of people, and everyone was speaking Spanish at 100 miles per hour—I’d learned it at about 10 mph.

Luckily we’d booked a cab through our hostel, so once we’d gotten through customs there was a friendly driver waiting with a sign. We got into his cab and he took off at what seemed like an unreasonably fast speed by U.S. standards.

Out of the airport and into the cab

Our cab driver peppered us with questions in Spanish as he sped down the narrow streets. I looked over at my wife helplessly, who looked back at me as if to say, “You’re the one who’s supposed to understand Spanish!”

After a couple minutes I settled down, got my bearings, and was able to communicate a little. On the way to our hostel, he warned us about crime in the city. People would snatch my sunglasses off my head, he told us, or yank my wife’s pretty earrings right out of her ears.

This information wasn’t making me feel any better, and as we approached our hostel, I started noticing more and more graffiti, homeless people, stray dogs, and other things that often signal danger in the U.S. Finally, we pulled up in front of our hostel. It was one of many doors on a narrow street where nearly every surface had been covered in spray-painted scrawl. The driver then asked us for 12,000 pesos.

I knew the currencies were different, but 12,000 sounded like so much—and all the guidebooks had warned us about local taxi drivers ripping tourists off. Not only that, but I’d forgotten to pick up pesos at the airport.

I told him that I needed to make change and went inside the hostel to get help. He smiled and kept our luggage locked in his trunk. Thankfully the hostel employee’s English was better than my Spanish.

He explained that the price was normal (that 12,000 pesos was about $20), and that since dollars were pretty much the default world currency, I could just give the driver a $20.

We paid up, unloaded, got into our room and flopped down on our bed. I lay there for a while thinking, “What in the hell am I doing here?”

Getting comfortable outside my comfort zone

Ultimately, things ended up being a lot better than our first impression. By the end of our initial two weeks in Santiago, we felt comfortable visiting the city’s parks, shopping at the market, and going out for a drink at night. All the places that had looked dangerous to us two weeks earlier seemed safe and comfortable now.

After that, we spent the next three months traveling all over Chile and Argentina without incident. We learned to really communicate in Spanish and got good at negotiating new currencies and cityscapes. We took cabs, buses, trains, and hitchhiked, stayed at hostels, in campgrounds, and with friendly locals. That trip continually pushed our comfort zones, and over time this became the norm.

Of course, several times over the next few months and on subsequent trips over the years I returned to the “What the hell am I doing here?” question when I felt absolutely overwhelmed by everything I didn’t know.

But not only did I always figure it out just in time, eventually I found out that I enjoyed learning and experiencing life this way.

In fact, it became something we sought out because it continually lead to some of our best travel experiences. At one point we got off a bus in Bariloche, Argentina, and started seeking out a hostel that a few other travelers had mentioned. It wasn’t in any guidebooks at the time, and all we’d heard was that we’d like it.

The building it was in was one of the biggest in the city, but seemed barely inhabited, and appeared to be undergoing a remodel, with torn up floors and tools lying around in the big lobby, but no other people.

We remembered something about getting to the hostel using a service elevator, and at the elevator we found a handwritten sign there saying that the hostel was on the top floor.

We rode up in the clunky elevator and stepped out into a completely stripped-down hallway, with graffiti covering what remained of the hallway’s drywall. At the end of the hall was a sign with the name of the hostel and an arrow pointing to the last door.

With a bit of trepidation, we walked to the end of the hall and knocked. The door opened, and we were suddenly in an expansive room, with couches and bean bags loosely grouped along the floor to ceiling windows that gave way to the best views of Nahuel Huapi and the snow-covered Andes we found. We met some of the most interesting travelers on our entire trip during the five days we spent at that hostel. The whole thing seems like a dream when I look back at it now.

A startup frame of mind

There’s only so much you can learn from a guide book or in a classroom. At some point, you’ve just got to jump into the real thing and figure it out as you go.

This is a frame of mind I found really useful in starting a few businesses and working at a startup. When you’re building a startup or working at an early stage one, things are constantly shifting in unpredictable ways. The job you were hired for one month may not be the one that you need to do the next month.

I can’t guarantee startup success if you develop this frame of mind. No one can. But I can say that you’ll enjoy the ride a lot more.

If you’re hiring for a startup, I recommend looking for people with this kind of experience. You don’t need to include “must have travel experience” in your job ad, but you should ask about experiences they’ve had that required them to live outside their comfort zone and adapt.

That, if anything, is the key to working at a startup, traveling, and perhaps life in general—the ability to adapt to whatever your environment demands and enjoy the process.

Paul Peters is content marketer and job ad writer with Betterteam. Before Betterteam, he spent six years building an education startup, where he was was involved with many aspects of the business, including marketing and hiring. He lives in Whitefish, Montana.

How to Prepare for Startup “Postpartum”