I like this story of how a business app came together even better than I like the app itself. And I do like the app, called NonLinear. I called it A Cool New Tool For Presenting Slides on the Ipad in my positive review on Small Business Trends. But I like the story better. 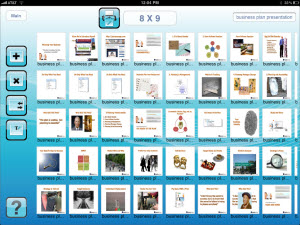 It started last February with Seth Godin’s The iPad App of my Dreams:

It’s a very simple concept: a collection of pages (slides, images, type, let’s call them pages) that are easy to navigate in a non-linear way. Instead of it being linear (like Powerpoint or Keynote), the pages are arranged in a grid or checkerboard. From any page, then, I can go back, forward, up or down, and the four diagonals as well. So depending on the conversation I’m having with my audience, my ‘next’ page can be any of eight. In addition, the app supports an external monitor. 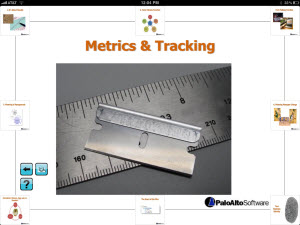 Nonlinear lets you import a PDF or PPT file and then jump around. It’s not for building slides, it’s for navigating them, and even includes a way to drive an external monitor in a clever way.

I went from there to the apps store to buy the app, which, as you see if you read the review, I like.

Keetsy Corp. built the app, and now it’s selling it. Here is that company’s retelling of the story:

On February 6, 2010, Seth Godin posted on his blog an entry titled “iPad app of my dreams: the digital talking pad.” The world was a-buzz. Could this app be created? Who would actually build this app? Was it as amazing as he promised it could be?

As a follow-up to the post, Seth started a wiki so that people who might want to make this idea a reality could share ideas on putting it together. Many people joined and contributed ideas.

There was a whirl of activity, of postings, of diagrams, of mock-ups — a storm of creativity. And then, within months, the conversation had died down to a faint drip and distant echo.

On June 14, 2010, Seth let out a sigh. No one had built his first dream app. That’s when Keetsy had had enough — it decided to make this app a reality.

And aside from that, this story is a great illustration of how products happen. There’s the idea and then the code, the company and the marketing. It was nice of Seth to post his second post about it, after it started shipping. And you’ll notice that he’s making no claim on the idea. He put it out there, and you or I could have built a product around it if we wanted to, and if we had the resources. And somebody else can do that still. The idea is out there.

Why iPad vs. Kindle Flap is Win-Win for All Sides

Why iPad vs. Kindle Flap is Win-Win for All Sides