If You Build It Award: iPad and Video 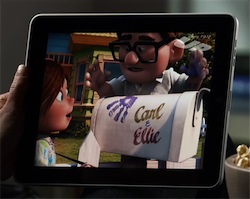 Here are more details (direct quote from that post):

But–wait a minute–wasn’t this completely predictable? Is anybody surprised? They come up with a beautiful, easy-to-use, relatively cheap small tablet built for iTunes, with a 10-hour battery life, and its owners watch videos on it? As opposed to sitting upright at a computer and watching video there?

The moral of the story is, in my opinion, that sometimes “if you build it they will come” works. Create something that really works well for people who use it. True, that’s not enough: You have to tell them about it, which is Apple’s strength. Nobody will beat a path to your door if they don’t know about your mousetrap. But when it’s good, and it makes a piece of life easier, that’s a great business success. (Image credit: it’s from Apple’s website)