International Do’s and Don’ts For the Traveling Entrepreneur

Doing business on an international scale is very exciting. But, it can also be overwhelming. Not only should you bring your “A-game” from a professional standpoint if you want to close the deal, you also have to bring it culturally as well. One misplaced word, hand gesture, or even inaction can deeply insult your overseas customer or partner. As such, the stakes are high, and you’ll need to know what you’re doing.

The bottom-line best advice I can give you on this is simple: Do your homework before the test.

Before you travel overseas for business, it’s smart to know a little something about that country’s culture, especially business culture. When to shake hands, make eye contact, bring a gift, compliment your host’s food, compliment your host’s wife or home, inquire about the well-being of his or her family, can all sink a business deal if done incorrectly…or not at all.

While many international professionals understand that not everyone comes from the same place, in today’s global marketplace, there’s a certain expectation that new players who have joined the game have done some homework.

This doesn’t have to be complicated or time-consuming. When you know you’re going to be doing business in another country, you should spend some time on the internet learning the basic do’s and don’ts for the specific country to which you’ll be traveling.

If a business knows it’s going to be doing extensive work overseas, it may even be worth hiring a native “cultural advisor,” either full time or temporarily. If a company is going to be establishing an office in another country, it’s best to focus your cultural education efforts on the staff who will be living and working in-country first. 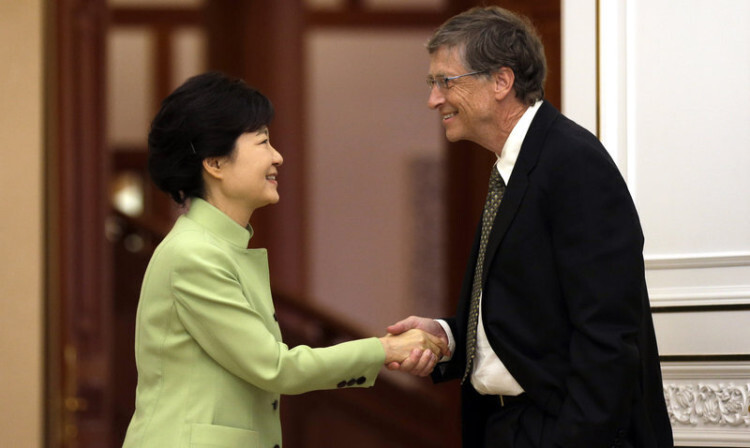 If you’re from a “Western country”—North America or the UK—chances are, a good firm handshake says, “I respect both of our organizations, you, myself, and our future, and I’ve come to do some business.” However, in Japan, Saudi Arabia, and even France, it means something different.

See Also: Is Bad Body Language Ruining Your Pitch? Here’s How to Fix It

Beyond that, what is your left hand doing while your right is shaking? Never thought about it? It matters. A perfect example: Bill Gates once shook hands with the President of South Korea (pictured above) and he absent-mindedly kept his left hand in his pocket.

As you can see from other images, Gates always has his hands in his pockets; however, this seemingly insignificant detail landed him on the front page all over the world for committing a major greeting faux pas in his host country. Don’t believe me? Google “Bill Gates handshake” and see what comes up.

See Also: The Best Places to Start a Business in 2015

Put boots on the ground

It’s best to hire someone from your country that speaks the language where you’re doing business, and to hire another person from that country who speaks your native language, if possible. This way, they can work as a cultural fusion team to ensure all goes well between your company, and the companies native to the country in which you’re now doing business.

Learn at least the language basics

While many of us don’t speak multiple languages, people in many foreign countries do, and more often than not, the “other” language they speak is English.

As such, you may not have time to learn a whole new language, but you really should commit to learning the very basics of the language of the country to which you’re visiting for business.

Even if you screw it up, your hosts will likely be honored that you at least made an attempt. Even if you, or they, provided an interpreter, it’s still a classy move to learn a few words in their language; it shows them that you respect their language and country, and if there’s one thing that translates in all languages, it’s respect.

In closing, I really can’t emphasize the importance on doing a bit of research on the country in which you’re planning on doing business before you go. This is simply because they are so different from one another in creative and business culture.

While I’ve attempted to hit the few generally across-the-board rules, each country is unique when it comes to customs and courtesies. The information is out there and easily accessible; when in doubt, just go the conservative route and take cues from your host.

Have you had experience running your business internationally? Did you make any cultural mistakes? Let us know in the comments!

Scott L. Girard, Jr. is the Editor-in-Chief of ExpertBusinessAdvice.com, and co-author of "International Business Basics: Learn What You Need in 2 Hours," and five other titles in the Crash Course for Entrepreneurs book series.