Jump to the Future and Ask This Question

You fall in love with your plan, and love is blind. You don’t see the fatal flaw.

I know a man who jumped headfirst into a new venture based on building a chain of used CD stores. The punch line? It was 2000. Napster was already there. Do you see the fatal flaw? He didn’t. And this was a man who’d had a string of successes. 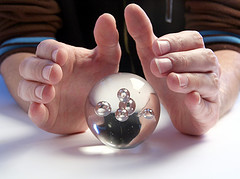 So here’s a trick that might, sometimes, if you’re lucky, help you see the fatal flaw.

This helps you think about flaws. Was it competition? Did the management lose interest? Was there not enough money? Did some new technology come in?

I don’t know for sure, but I believe that if my friend with the used CD stores had done this exercise, he would have come up with the possibility of a change in the way we deal with music, meaning Napster, downloading, iTunes and so on.

And, for the record, I haven’t done the research, either, but what do you think? Would you like to own a used CD store? What do you think has happened to the sale of used CDs?