Entrepreneur Zack Price is guest blogging his experience this week on the 2013 StartupBus as it makes its way from Chicago to SXSW in Austin. On StartupBus a team of strangers, traveling at 60mph, have about 72 hours to conceive, build, and launch a startup. You can catch up with Post #1 in this series here.

We’re on the Startup Bus – It’s name is Fred.  Or Snufulupugus.  Or Wilson… Depends who you ask on the bus.  We’re down to these 3 names.  You try getting 25 strangers to agree on the name of a freakin’ bus.

How about – Fred Wilson?  Isn’t he, like, “a VC” or something?  I should ask him.  I was all for just plain Snufulupugus, although that would severely restrict our 140 character tweet limit.  Fred “Snufulupugus” Wilson.  Kinda rolls off the tongue, don’t ya think? 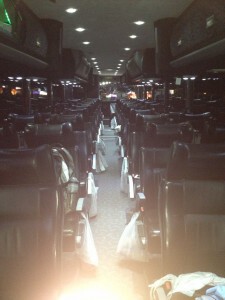 The inside of SnufulupuBus (that’s what she said).

That’s what we call a pivot, start-up fanatics.  You take one idea, run with it, and if it’s not going well then “pivot” in another direction.  Change business models on the fly.  Easiest thing ever … not.

Everyone brought snacks on the bus: granola bars, energy drinks, gum, etc.  I brought a 5 lb bag of sour gummi cherries on board, 3.2 lbs of which I consumed while packing up my belongings last night.  My bus-mate, and future rock-star entrepreneur @baldingboy ate the other 1.8 lbs.  Now he’s sick and it’s all my fault.

The bus is everything I dreamed it would be and everything I have nightmares about.  There’s a guy who sits alone at the back of the bus with super long hair, a super long beard, and pimp hat. There’s two guys with that description, come to think of it, but this guy I’m talking about is on his 3rd startup bus!  Respect.

There’s some chatter that he even has a Startup Bus tattoo.  Hardcore shit.  I want to know this man.  I want to interrogate him for hours about Startup Bus, and learn everything about him.  Man crush.  More on him another time.

Back to pivoting ….  Not just with the bus name, but the bus SCHEDULE.  Originally we were supposed to go to Nashville, then Shreveport, LA.  Let’s just say, New Orleans seemed a lot more tempting than Shreveport.  In fact, you should probably completely ignore the original schedule I posted.  I’m not even gonna post the new one, since I’m sure it will change. 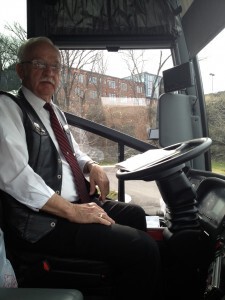 This is Doyle. He’s our bus driver. We wrote all over the windows in dry erase marker, but he didn’t understand what dry erase was.

Before we left Chicago, I emailed the grandaddy of the Lean Startup movement, Eric Reis, for some ultra lean skinny tips.  He oh so wisely instructed me to “Treat what you’re doing as an experiment.  Try and test something every 4 or 6 hours.”  Brilliant.  How does he come up with this stuff. 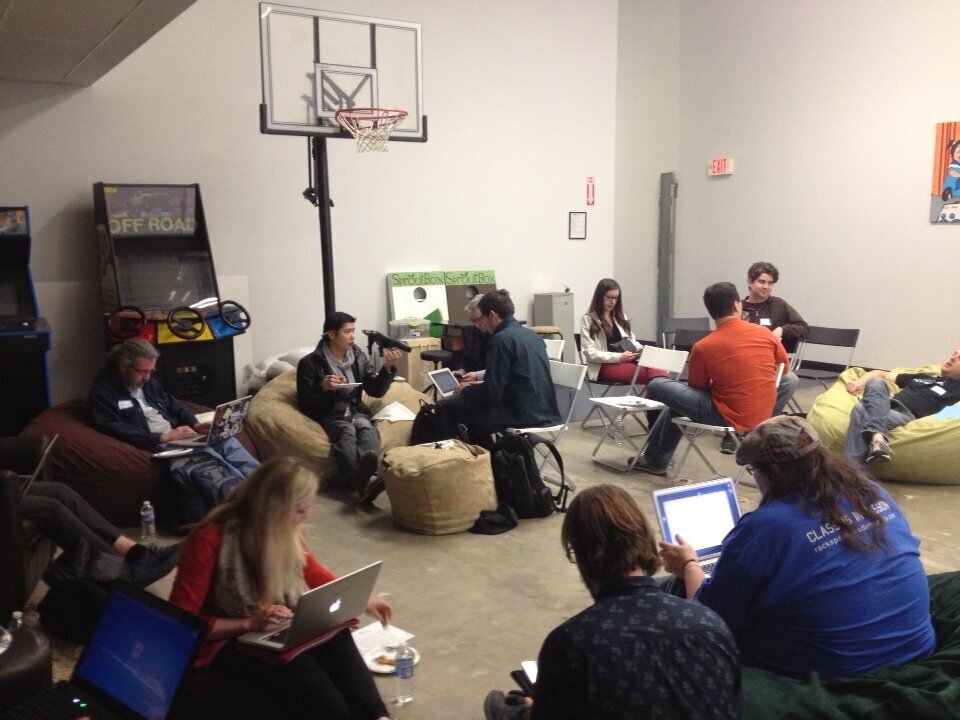 The StartupBus took a stop for pizza and pitching at Sproutbox.

Once we were settled in, everyone got up in front of the bus and gave a pitch about their skills, ideas, and why they’d be a good team member.  My goodness do we have a talented bus.  It’s insane, really. 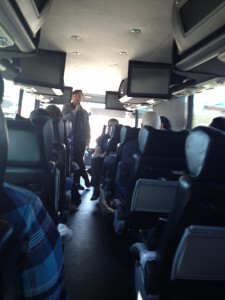 Pitching ideas, and yourself, on the StartupBus

When it was my turn, I spoke directly from the heart then returned to my seat, only to read this tweet which I’m pretty certain was about me … unless there is someone else on the bus who has no real skills to talk about.

I was down, out, trapped on a bus with strangers with nowhere to go and a company to build.  So I did what any down-on-their-luck technology startup would do.

I picked up my iPhone and tweeted @ the one and only MG Siegler, begged him for advice for what to do on this god forsaken bus… and he replied: “plenty of beer (as long as you’re not driving)”.  True dat.

I hope the bathroom on Snufulupugus (our bus) has a better reputation than The Jackalope.  We’ve had a few foursquare check-ins…still no Yelp reviews yet.  Stay tuned though …

… and don’t stop being a linchpin.