Entrepreneur Zack Price is guest blogging his experience on the 2013 StartupBus as it makes its way from Chicago to SXSW in Austin. On StartupBus a team of strangers, traveling at 60mph, have about 72 hours to conceive, build, and launch a startup. You can catch up with Post #1 in this series here, #2 here, #3 here, and #4 here.

So I’m doing this bloggy thing here to spice up the Bplans Blog with a little humor and a light hearted look into the insanely crazy experience you now know as StartupBus.

I literally can’t wait to highlight all 12 great companies that made the semi finals, but, since my team NextChaptr is one of them, let me get this self-promotional garbage out of the way right here right now.

In my next bloggy post I’ll tell you all about the eleven other startups that made the semi-finals.  I don’t want to ruin their genius with my propaganda.  And let me tell you right now, they were pure genius.  You won’t believe these semi-finals. 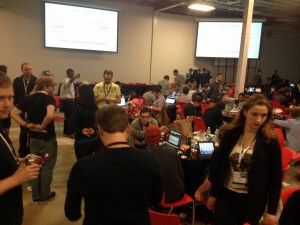 Let’s just say I hope all those servers at Rackspace are backed up safe and sound, because the Mexico bus dropped da bomb on the Rackspace auditorium tonight with a full blown national parade, waving their country’s flag while everyone in the house belted out the “Ole Ole Ole” song.  Not kidding.  You’ll see.

However, this here post will be dedicated to NextChaptr‘s semi-finals pitch, a book publishing company with a crowdfunding twist.   If you want to learn more about NextChaptr watch some of the videos below.

To keep it loose I’ll be referencing some pop music from 1990’s and early millennium.

30+ teams started, got vetted down to 12, and after this round there will be 6 left pitching in the San Antonio Rackspace finals.  From there the top 2 will go to Austin, TX to strut their stuff on stage during SXSWi.

I still don’t know what the winner gets, nor do I really give a shit.  I’m sorta hoping we lose already so I can get some sleep.

Before I dive-in … it’s important to note that we have a new panel of judges who will decide which teams move on… and one of the judges is the man, the myth, the fable…Robert Scoble. 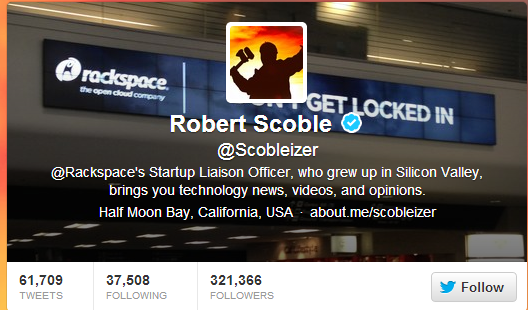 This guy is my freakin’ idol.  He’s such a social butterfly that between twitter, facebook, and his own blog he’s got about 4,000,000 people following his every move.  He moves fast, and often, as you can see from his surreal
tweeting statistical activity.

He’s so much of an icon, that until I saw him on stage just now, I don’t think I even considered him human.  I mean look at his avatar.  Funny I say that, because on April Fool’s day a few years ago, The Register ran a story that Scoble wasn’t a human being at all, but rather an IBM-bot project.  Coulda fooled me.

Simply put – IMHO Robert Scoble is the greatest blogger that has ever lived.  (At least until PaloAlto.com and I teamed up for this).

And now I was supposed to look Scobleizer in the eyes, in front of all those people, and sell him on a business concept? WTF. For a moment, I looked down at the ground (see photo).  Flashbacks of earlier that day, when Falon Fatemi ripped apart my pitch, started running through my mind.  But I knew my team was behind me tonight. 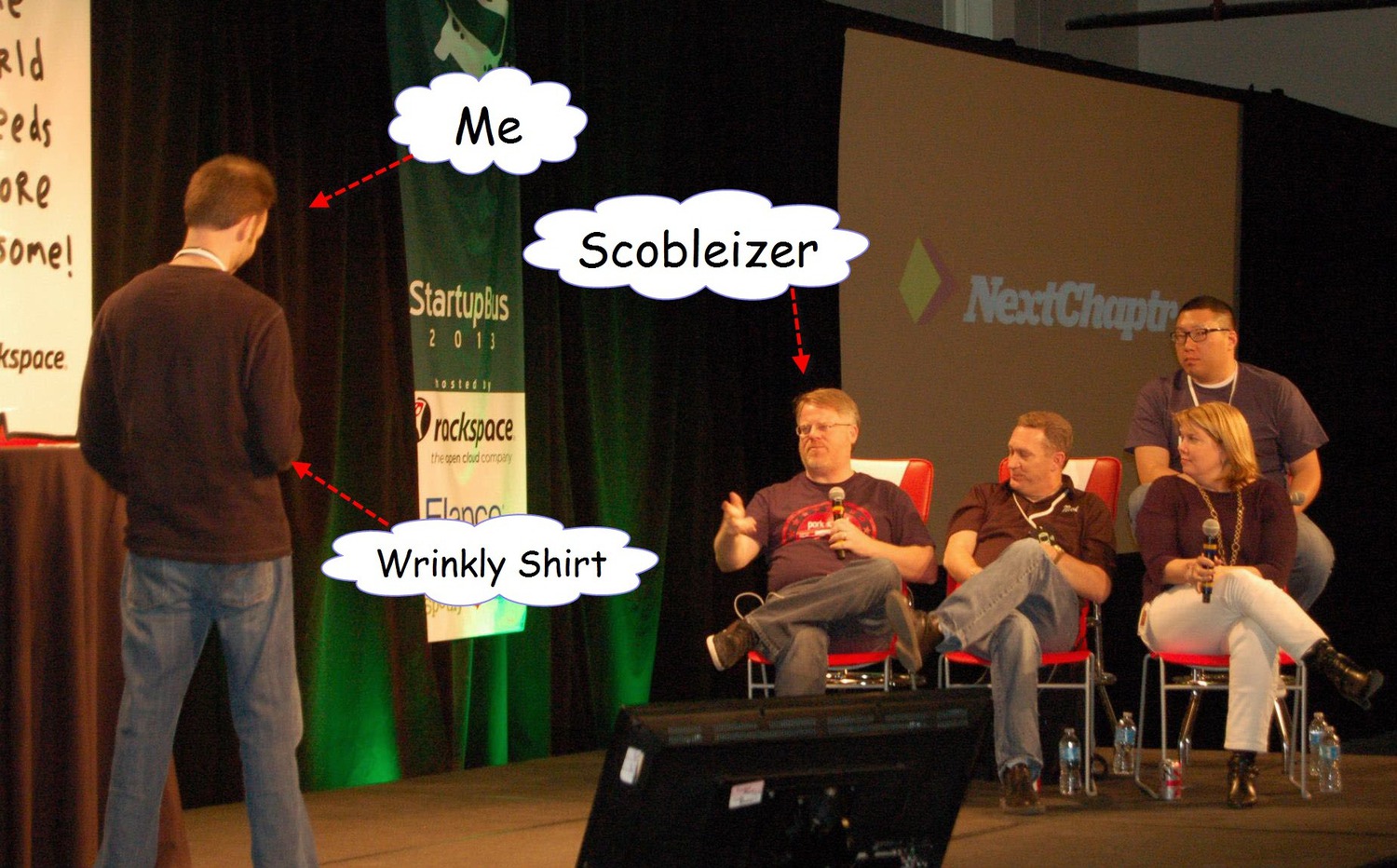 By now we’ve been at Rackspace for over 10 hours. The crowd is restless, the Rackpace Auditorium was jumpin, jumpin.  Every seat is taken, so I started pacin’.  It’s packed all up in here, up in here, with bus-preneurs from New York, Florida, Chicago, San Fran, and Mexico, plus the “frat house on wheels” known as the Alumni Bus.  Ya’ll gonna make me lose my mind. 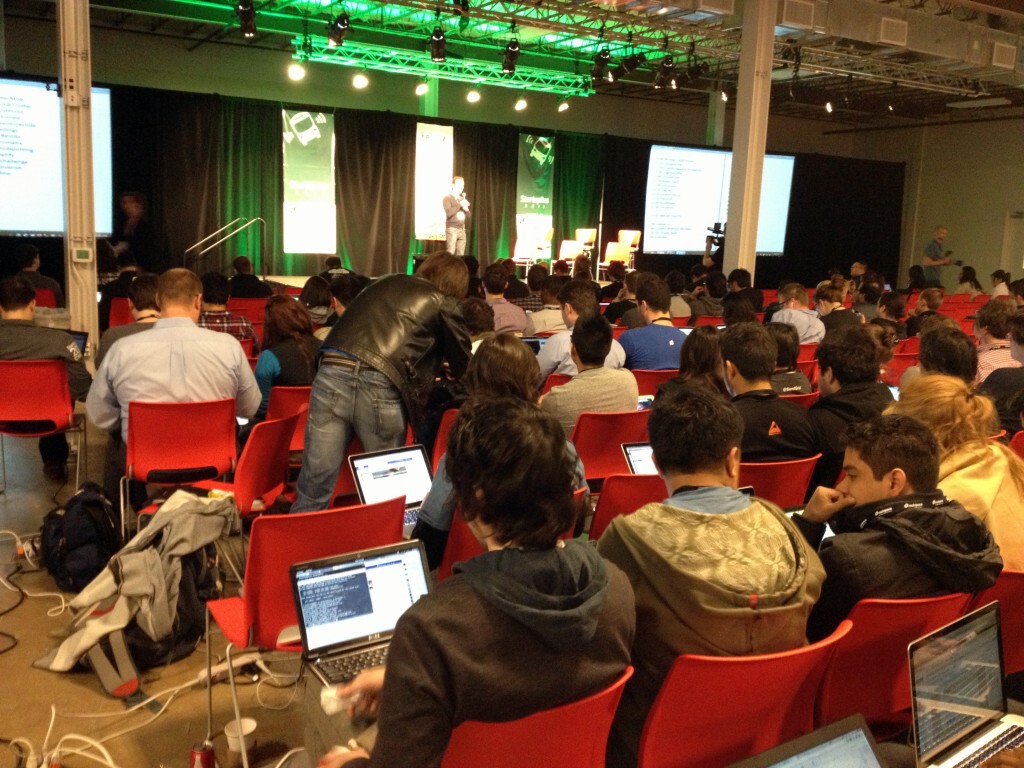 I was on no sleep, performed horridly in the morning session, and spent the whole afternoon beating myself up over it.  Then it hit me like a ton of bricks – I’ve spent the last 10 hours in a freakin’ warehouse filled with data servers.  No wonder this live-blog has gotten so weird, so fast.  I can barely hear myself think, and thinking straight I was not.

What happened next?  Just watch the video below. And don’t hate the playa … hate the game:

Did you watch it all the way through??? If you fell asleep, The Scobleizer’s parting words were:

“If you keep going on (to the Finals), and I think you probably will be…”.

(There’s no guarantee we advanced to the finals.  You’ll have to find out what happens in my next post.)

You see, what happened during this pitch was, I was barely awake, flowing on pure adrenaline/solixir and a sugar high from the final leavin’s of a 5lb bag of sour gummi cherries. I grabbed the mic, set the kitchen table, and then pumped up the crowd and judges. 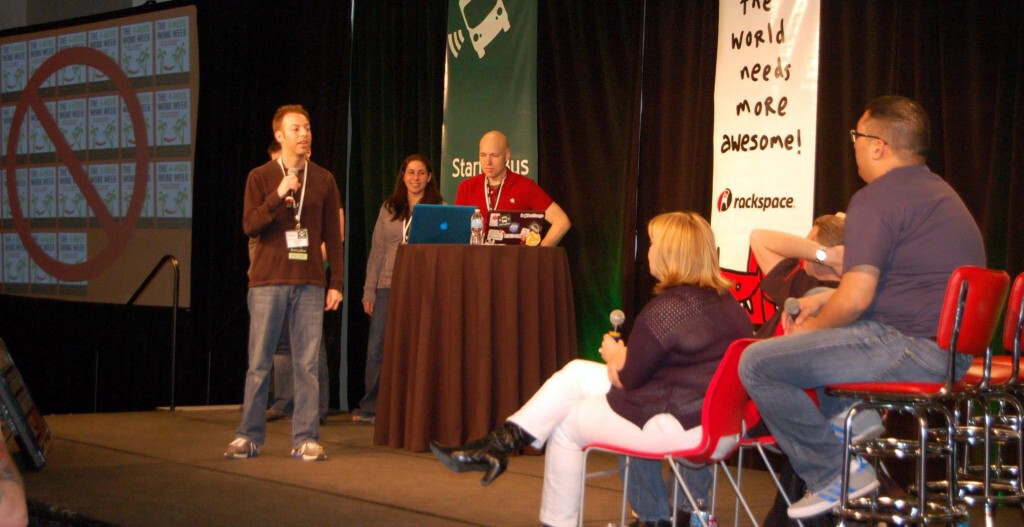 I even free-styled a line, calling out the Rackspace founding story, & how it should be a book idea.

The crowd absolutely ate it up, the judges loved it.  In fact, once I finished and the audience settled down, the first words out of Robert Scoble’s mouth were: “I love this idea.”  I finally done good for the team.

And then, when Scobleizer brought up the tricky sponsorship question, I simply handed the baton to Chris Courtney who clonked them over the head with some lean methodology, just as he did earlier that day.  Gotta know when to pass the pill.

The judges then asked me some questions about publishing.  No problem.  Get comfortable, why don’t you? 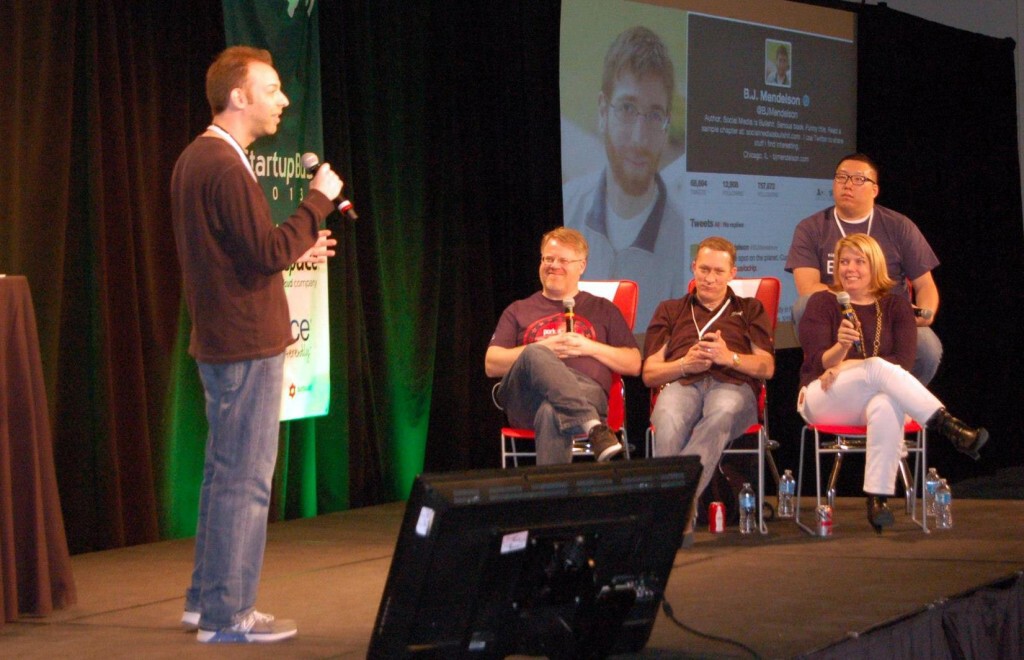 I answer these same exact same publishing questions every day like it’s 1999.  Not joking.  I actually started a book-publishing company in my college dorm room in … 1999.  Now here in 2013 I run this digital publishing company out of 1871 in Chicago.  I’m an OG.  I’ve been publishing books since AOL dial-up internet was in style.  I’ve been in the game for over a decade and could do a Q&A like this in my sleep – and I did… literally.

<beginrant> I’m not gonna continue this self-promoting rant about NextChaptr much further.  That’s why they invented social networking… to promote your own agenda.  Why do they even call it social networking?  Shouldn’t Facebook, Twitter, LinkedIn et al simply be called “Social Proofing”?  I have 0 connections on LinkedIn (still get 64 emails a day from them).  I’ve never worked for anyone else.  And I never will.  Does that really mean I’m social worthlessness?  Great, there I go running my keyboard about digital age culture again. Chill out, Chicago Startup Guy. </endrant>

If you want to read more about how NextChaptr rocked it – check out this tweet, that tweet, everywhere a tweet…tweet.

Like any sleep deprived dude a bit unsure of what city or state he is in, I foolishly wore the same black long sleeve t-shirt I had worn just 36 hours earlier to Emma Email HQ in Nashville, TN where pitchers & catchers were reporting to spring training.

If you want to watch me pitch at Emma HQ, in my black long sleeve T, check out the video below.

Like my MC Hammer parachute pants?  I thought so.  If you want to learn more about our trip to Emma HQ read the Just To Be Claire tumblr.

As you may have heard, Mashable photographed my pitch tonight on stage and used it for their “How to Pitch Your Startup in 3 minutes” story.  Written by NYC StartupBus’s own Erica Swallow, guest featuring none other than The Scobleizer himself.  Here is the photo I may never live down. 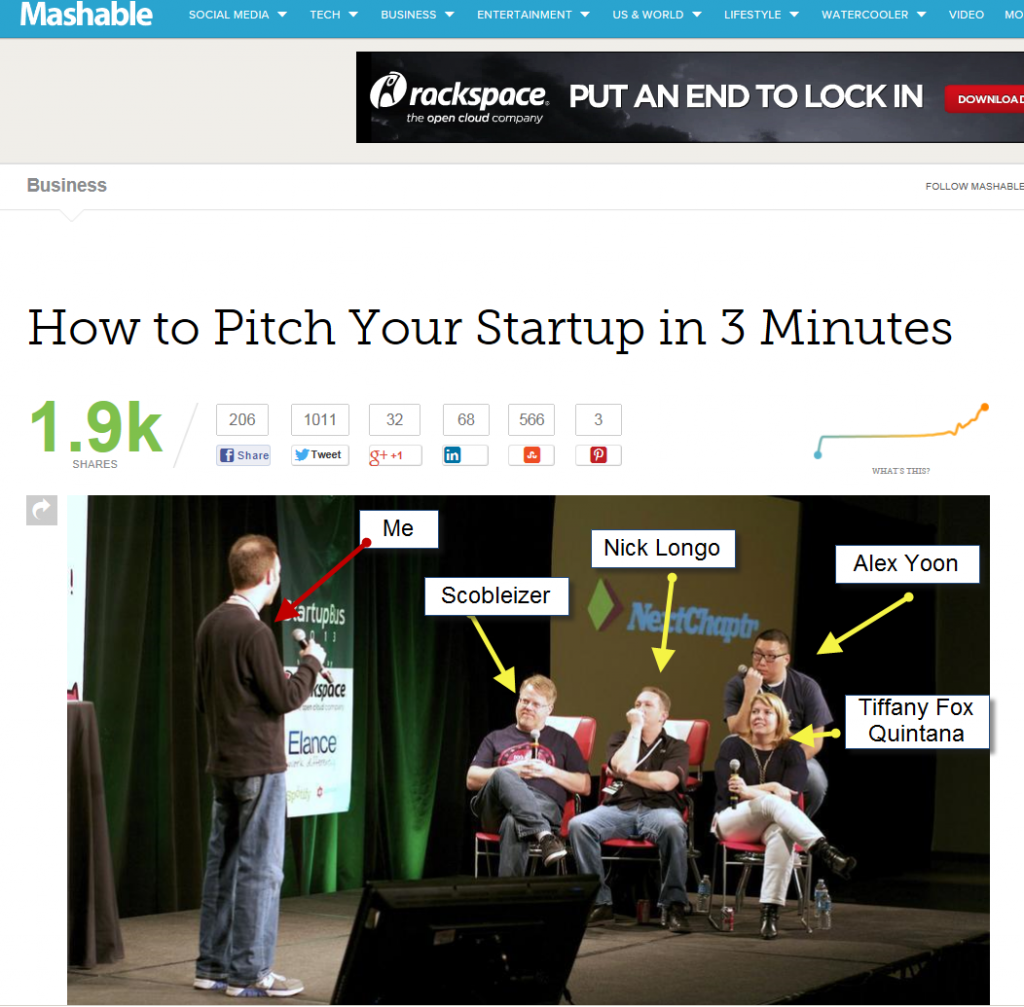 Yup, that’s me, I’m already getting the “I saw ‘your ass’ on @Mashable” tweets and emails.  FB too… you’ll see in a second.  Suddenly the media thinks I’m the pitch master-flex.  Despite the fact I completely choked giving the same damn pitch earlier that day.  Even Janet Jackson would tell you, this Startup scene is so “What have you done for me lately?” 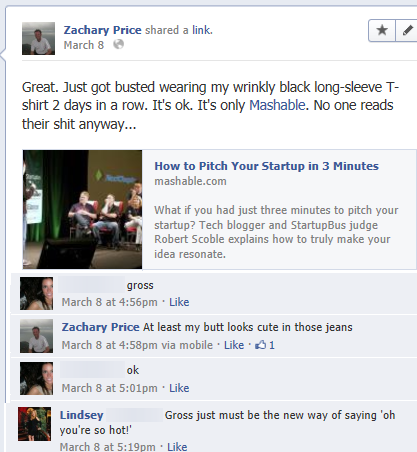 So now this freakin’ picture of my ass is all over the internet, twitter, instagram… I thought I was so cool, so I social proofed the Mashable thing on my facebook.

But my 15 seconds of fame became tarnished over a $4.99 wrinkly black long sleeve-T I got at Old Navy.

Immediately my ex-gf who I haven’t seen in months commented “gross” on my timeline wall.  Uhhhh, yeah, nice Stalkin’ to ya.

Luckily for me, back in Wrigleyville my long-time BFF Lindsey was on neighborhood watch duty and blew the whistle on the facebook trolling… busted.

These awkward fb interactions are becoming a worldwide epidemic. I’m telling you, we might have to get the UN involved in these international cyber crimes.

Okay, now I’m seriously losing my mind after several straight days of no sleep, operating out of a data-farm warehouse, and cameras flashing in my eyes from every angle.  I can’t even see straight anymore.

All I see are Purple Cows … Being Remarkable. I’ll try to be remarkable tomorrow … IF we advance to the Rackspace Finals.

Did Scobleizer really just like our idea?  Time to cool down, gimme an Ice Cube. Today I didn’t even have to use my Gateway… I’d have to say it was a good day.

Check back soon … you will not believe the other 11 incredible startups that were formed on the buses.  Including San Francisco Ghosts, Clouds over Mexico, and Bronx Mobsters – oh my.  But first, find out how TEAM MEXICO stormed San Antonio in post #6.