Living the Music: Music engineer, entrepreneur strives for success in the Northwest 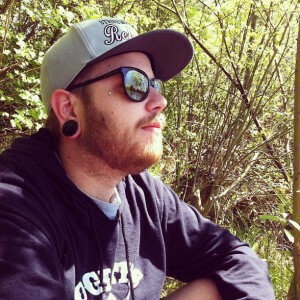 Chris Reeser, 27, is the lead music engineer at Telos Studios and co-founder of Relentless Hustle, a budding clothing company that has already sold around 2,000 products. Reeser met with us to talk about the engineering business model, the music industry and the challenges he faces. This Q&A was edited for clarity and brevity.

Up and Running: When did you realize you could make a living off of your music?

Chris: That was probably three years ago when I started pushing a lot of studio work and started earning my stripes. I was getting better with my abilities, my knowledge and my grasp of sound in general.

How did you start earning income?

When I started getting clients that were willing to pay, it was kind of an eye opener. The money really started becoming a full-time job when I got with Telos about a year ago. Other than that, I was making some money, but my main job was doing graphic design and web design.

When you hear the term music entrepreneurship, what comes to mind?

People that are looking to progress the game of music. Whether it be doing higher-quality production or invading different markets, that’s really what I feel. Young kids that know what the limits of business are going to be set at, and trying to push them.

Why don’t you think that term is used a lot?

I don’t really know, probably because the music industry is such a one-sided kind of object.

Why do you say that?

Well, if you’re going to create money and make money off music, you’re gonna basically be owned. You’re gonna be owned by EMI, BMI — all those sorts of things. The money starts coming when you reach a superstar status. Otherwise, you’re going to be on a small label or even a medium-sized label, doing full-on touring but not making more money than a regular job and an education could make you. So really, a lot of people with aspirations of being musicians get detoured from doing the entrepreneurial aspect of it.

Right now I’m working with Telos Studios and my buddy James Aronoff doing all the recording, engineering, mixing and mastering that comes our way. We’re trying to vastly expand into any other kind of market that we can with video production, as well as getting bands from outside of Eugene and Oregon to come to the studio.

With Relentless Hustle, right now we’re really trying to find some investment. Both my co-owner and I are having a lot of time that is being consumed by other things, so we haven’t been able to put our full dedication to it. It’s on somewhat of a slow hiatus while we’re looking for investment. But other than that, we’re looking to expand there as well and have multiple online merchants that are ready to sell.

How does an engineer gain business?

I promote to bands and artists that are wanting to record. I record every style of music that there is, and I’m always looking to do more. You offer your services, you get them to come in, and you record them. Mixing and mastering is optional.

How do you maintain business? What keeps people coming back?

Really, it’s about being personable and being a good employee to the artist. Because then they want to come back, and return business is where all the money comes from. You can’t fill your slots up with new clients every day it’s impossible. I rely so much on people that come back and record with me because they like how their music comes out.

There are a lot of musicians in Eugene; does that mean there is a lot of business?

It’s true, but to a very, very certain extent. There are only so many artists in town that have the funding or desire to pay $35 to $40 an hour on studio time. There’s only that many that believe in their music enough to pay for the quality. Home recording is great, but recording in a professional studio with an actual engineer that’s done a lot of different things is even better.

How does $40 an hour compare to the standard rate?

The prices are fairly standard for the quality of our studio. There are a couple other places in town that charge just as much as us and aren’t nearly as good as we are.

What have been some of the challenges that you’ve faced in a small market like Eugene, Oregon.

The economy. The way it is. Other places have picked up. But here, it’s still being hit pretty hard. People are still struggling from that. We don’t have a huge economy of one certain thing here that drives the whole town. Like technology or anything like that. So really it’s finding the ability to work with people’s budgets and not breaking our own pockets trying to run a business that’s not going to be profitable. So it’s been finding the business model of being affordable, but making money for ourselves.

How much business awareness do artists need in the music industry?

A lot. The more you learn about the business of the art you’re trying to be in, the bigger upper hand you’ll have.

What’s in store for you in the next few years?

Really progressing my ability in engineering and the clients that I work with. I’d like to go to subsidiary labels of large record labels and start getting bands sent to the studio to do albums. That’s really what we’re trying to do. We’re pushing to make the best music we can and to create the biggest buzz that we can. We have the potential to be one of the best studios in Oregon and the Northwest. It’s pretty much forward progression for us.

This is part of an on-going series on music entrepreneurship. An archive of all the posts in this series can be found here.