I guess this isn’t really news, because it’s pretty much what everybody expected. But still: The ADP National Employment report came out again today. The part that interests me most, the small business portion, shows yet another 284,000 jobs lost last month in the small-business portion of the economy–businesses with fewer than 50 employees.

How bad is it? I downloaded historical data to produce this a chart of small-business job growth and loss over the last 24 months: 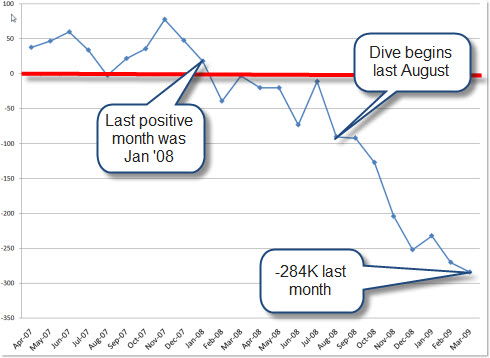 “Despite some recent indications that stock prices, consumer spending and housing activity may be bottoming out, employment, which usually trails overall economic activity, is likely to remain very weak for at least several more months.”