What Motorcycling Can Teach You About Making Decisions

It’s been a long time now, but in my other life (when I was living in Hawaii and before I worked for Palo Alto Software), I was a motorcycle safety instructor. I trained over 1,000 people through the Motorcycle Safety Foundation Basic Rider Course. The course taught not only the mechanics of how to ride, but—equally important—how to develop the mental skills to keep track of what’s going on around you to ride more safely. A lot has changed in my life since then; those years are wonderful memories. Now I affectionately refer to my GTI two door sport coupe as my “Oregon Motorcycle.”

And yet every day when I get behind the wheel of my car, I practice the same mental skills that I learned and taught to my student riders. I’m constantly watching and monitoring what’s going on around me and determining what, if anything, I need to do to minimize risks.

These skills aren’t just for riding motorcycles, they’re also good for running a business. Surprised? Stay with me. Here’s an example:

I’m traveling on a four lane road (two lanes each direction), and I’m in the left lane. I look ahead to the next intersection and see the light is green. In the right lane just beyond the intersection there’s a bus stopping to pick up passengers. In the oncoming middle lane, there’s a car waiting to turn left.

I know from driving this road daily that the traffic lights are preset at 35mph; the previous light started to change to yellow when I traveled through. This light was going to change soon.

What’s the problem? Outwardly, there appears to be no problem for me. At my current speed, I can safely make it through the intersection before the light changes. Unlike the cars behind the bus; they’ll have to stop and wait.

Sure they will. Everyone LOVES stopping for a bus, right?

Here’s where the mental game kicks in.

Problem: The worst-case scenario is having one (or more) cars pull out in front of me to get around the bus. And what about the car waiting to turn left? If they decide they’ve got room to go, we could meet in the middle of the intersection as I’m cruising on through.

By looking beyond the surface, I determine I have multiple risks to deal with. Add to the mix that when the light changes from green to yellow, it could trigger hasty decisions from other drivers.

In driving, as in life, there’s always more than one option.

Which one would you have chosen?

The first choice sets me up to REACT to a potential situation after the fact (will they or won’t they?). It reduces my space and time which reduces my options. In other words, I’m betting that nothing will happen to affect me, until it happens.

The second choice takes a PROACTIVE approach—make an adjustment ahead of time to minimize a perceived risk.

I chose option two. I slowed down and stopped as the light changed from yellow to red. Then I sat in my car and watched the craziness play out in front of me.

Results? Three cars pulled out and went around the bus. The left-turn driver almost hit the third car going through the intersection on a yellow light, then made their left turn on a red light.

Did I know this was going to happen? Nobody can see into the future, including me. But the mental process I used helped me uncover risks before they became an unfortunate reality.

I’ve become a big fan of Proactive vs. Reactive thinking. 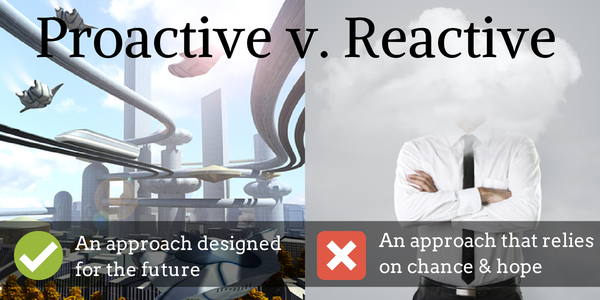 And that brings me to my earlier point—these same mental skills can apply to managing your business proactively:

This process won’t eliminate the unexpected completely, but each time you can minimize a risk to your business, you and the business can benefit, and the time, effort, and money you save can be used elsewhere.