What causes business failure? Obviously that’s a great question, but seriously, isn’t that like asking what causes death? The answer being a vast and mushy mess of different causes and factors plus the occasional, rare, simple and obvious cause like getting run over by a bus? 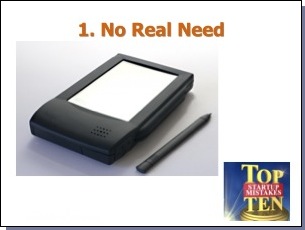 Listing causes like running out of money or too few customers — which happens way too often — is something like saying the cause of death was failing to breathe.

Nobody will ever be able to tell us in any organized and useful way what causes business failures without a lot more work than I’ve ever seen done on the subject. Business survivors don’t because they didn’t fail. And people who failed are hard to find in any organized and statistically random way, and without starting with a random list a survey will be flawed. Furthermore, people who failed don’t often really know why. If they did, they might have fixed it. And people who failed, when they do have a good idea why, aren’t all that likely to tell anybody the truth.

So why the lists? First, because we read them. They’re interesting. Second, more important, because they serve as reminders. This morning I encountered two such posts from within the last week, 7 common mistakes young founders make on Business Insider and Top 3 Reasons Why Lifestyle Businesses Fail on business to community. Both posts are interesting, both have good reminders, but neither really works because the one lists mistakes made by people young and old, not just young founders; and the other lists reasons any business, not just lifestyle businesses, fail.

My favorite among the mistakes of young founders were listening too much to others, mismanaging money, and not charging enough for their services. I’m sorry to say it, but I’m an old founder now, and none of those mistakes are common to young people. Welcome to humanity. And not charging enough for services is one of my absolute favorite and most common mistakes made by all small businesses — but that’s just me, with anecdotal evidence and related stories.

And those reasons lifestyle businesses fail? The three reasons put forth — vitamin vs. aspirin, launched without validation, and going outside your network — don’t work well, and where they do work well they apply as much to any other business as to a lifestyle business.

Two of those three boil down to what I call no real need, my all-time personal favorite reason for business failure, but — again — based on stories and anecdotal evidence. The vitamin vs. aspirin idea doesn’t work because we all know lots of vitamin sellers make boatloads of money, and, more to the point, at least in developed consumer-oriented economies like ours, people spend way more money on things they want than they do on things they need. Is soda pop or fancy bottled water an aspirin or a vitamin? How about a gourmet meal? A vacation? The problem isn’t aspirin vs. vitamin, it’s want to buy or not.

And launching a product without validation isn’t the cause of the failure; it’s that after it launched, nobody wanted it. I’ve been directly involved with several very successful products launched on hunches, without validation. Oh, and by the way, have we heard of Steve Jobs? He said “it’s not the customers’ job to know that they want.” There too, the problem isn’t pre-launch validation or not, it’s want to buy or not.

But still, like I said above, these lists are good if they’re interesting and they serve as reminders. So I hope this one, and the two I link to, serve as reminders about the dangers of underpricing and the critical importance of selling something people want to buy.