Have you seen this? Later this week, Amazon.com is releasing its new Kindle, a new kind of ebook reader with Amazon behind it. I’ve been a fan of ebooks myself. I’ve been tempted to buy the new Sony reader, and I did buy an early ebook reader for a daughter who is a voracious reader. She used it a lot, but finally gave it up when Amazon and others stopped supporting the format. 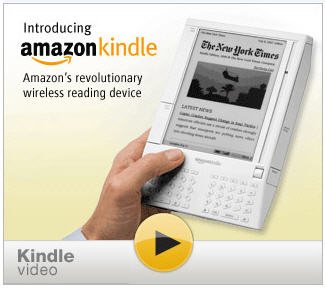 I haven’t seen a Kindle yet. I’ve read the reviews, and I’m intrigued. It seems expensive at $399, and it also seems that what it does is sort of like something that every laptop and tablet computer already does. Sometimes I wish my iPhone had an ebook reader facility.

This is the kind of product that can generate a market around it. What I’d call food for thought. Will it change the way we read, at least for some people? Will it go into backpacks and purses and briefcases and carry-ons? I’m intrigued, but then, I’m a gadget freak.

Seth Godin, definitely one of my favorite authors, said he wanted them to give his books away for free:

The challenge that my hero Jeff Bezos has is that if he’s really really lucky, he’ll sell a million of these things in a year. And that means that at $10 a book, you need to have significant market share to make an impact. The Sony reader has been out for months and it has sold, perhaps, a few thousand units.

My thought was to use it, at least for a few years, as a promotion device. Give the books for free to anyone who buys the $400 machine. (Maybe you can have 1,000 books of your choice, so there’s not a lot of “waste.”) You’ll sell more machines that way, that’s for sure. And the people willing to buy the device are exactly the sort of people that an author like me wants to reach. No harm, no foul, all three of us win. If there were a million of these machines out there and an author had a chance to have her next book show up automatically on all of them, few among us would say, “no thanks to that exposure.”

So is this an opportunity for you? Market need? A new way to sell your book, newspaper, newsletter, or manuscript?

Success of the Kindle

Success of the Kindle