I thought I was pulling a fast one. I really did.

Before I ever got on the StartupBus I was making conversation over email with Brooklyn Bridge Ventures icon Charlie O’Donnell about his kick-ass blog ThisIsGoingToBeBig.com and how I’m turning blogs-into-books for my DigitalBookNetwork.com.

He wished me luck and said to @ him in Austin, Texas, for SXSWi. But I needed him while we were on the bus and in need of some expert startup advice: 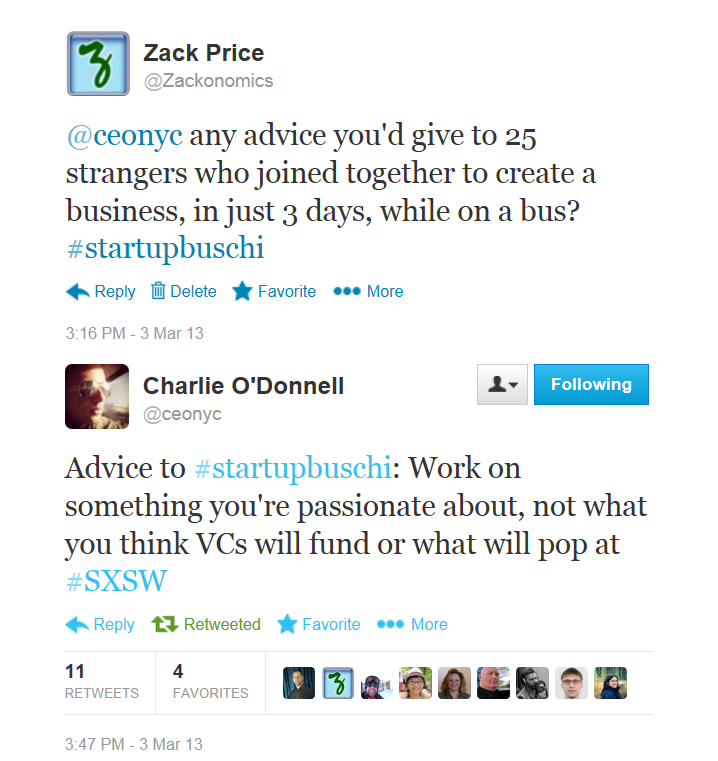 Charlie ended up saying that he’d be on the startupbus himself but he has no usable skills (that’s why he became a VC).

Unfortunately for me, our bus had no wifi or cell phone service and it seems that the New York bus intercepted Charlie’s tweet before it even left the five boroughs. Their stacked bus of entrepreneurs brought the passion and one of the teams that formed on the bus from New York is still going strong today, months later…

Exversion — the first-ever social collaboration platform for data that wants to do one thing… make data sexy. NOT an easy thing to do.

Sounds kinda sexy when ya say it aloud. “Exversion.” Try saying it in a very low whisper to yourself (or the person next to you): “Exversion.” Sexy, right?

Tal Flanchraych, Marianne Bellotti and Jacek Grebski teamed up on the NY bus to create a unified API for the world’s open data, and publishing tools for companies who want to distribute their data. By aggregating open datasets from across the web, Exversion allows you to find the usable data you need, which you can then instantly access, integrate and share via a single API. 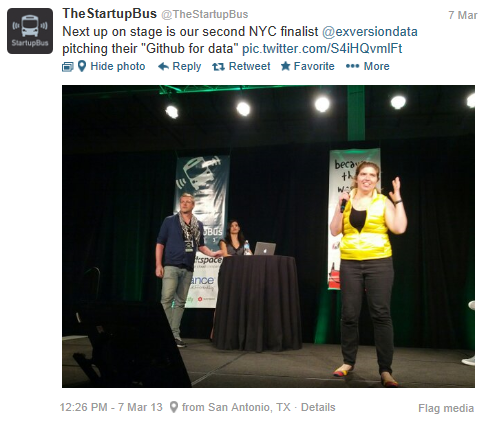 Exversion not only made it into the StartupBus finals at Rackspace, but hundreds have already requested invites to their private alpha. The Exversion team is so passionate about this vision that they’re now working full-time on it!

These three co-founders even headed out west when they scored an interview with Y-Combinator.

While out there Tal networked her way through Silicon Valley while Jacek was being interviewed by Fast Company and ijNet.

Meanwhile Marianne looked for lodging when she laid eyes on an RV home/office on wheels. Bootstrapping at its finest, Bellotti wrote the most amazing article of Exversion’s StartupBus experience and Tailgating Y-Combinator that wound up on page one of Hacker News.

Then they went to the Book Expo America Publishing Hackathon where they helped mentor the hackers and did a trial run of the API and even saw an app built on top of it. Sexy, right? “Exversion”.

As a book publisher myself I can tell you this technology is pretty fresh, and there are endless ways it could be used to improve data analysis. I’ve published a few hundred books over the years and I’ve got data out the wazoo over here. I don’t know what to do with it, it’s ugly as hell, and I want it to be sexy. I can’t wait to see what Marianne, Jacek and Tal can do with it.

This New York tech scene is hot. White hot — just check out this heat map of tech startups there.

The Exversion team is currently working on potential partnerships with some organizations and agencies, so be sure to follow them for future announcements!