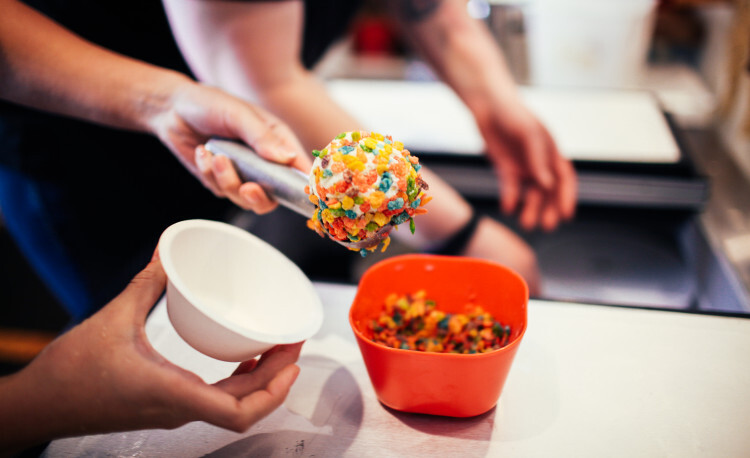 An employee at Red Wagon Creamery serves up a scoop.

Helmed by husband-and-wife team Stuart (Director of Sales and Marketing) and Emily (Managing Director, Board Chair, and Chief Ice Cream Inventor) Philips, during 2015 and 2016 Red Wagon is preparing for a big “regional-national” leap in production and distribution—in part by taking advantage of a new public investing program.

The cook and the lawyer

The daughter of an art teacher and a Lutheran minister, Emily graduated culinary school and for 10 years worked in an array of cooking jobs, from line cook to sous chef, in places ranging from a rugby club pub to a $1,000-a-night resort in New Zealand. Along the way, Emily’s experiences working with food and in the food industry made her want to start her own business.

Emily’s ideas kept coming back to the quintessential American treat: ice cream. But, she didn’t like the shortcuts, pre-made base mixes, and preservatives that dominated the marketplace. “We wanted ice cream that we make from scratch,” Emily says, “to showcase local, Oregon dairy, and using local, seasonal fruit, berries, and produce.”

By contrast, Stuart grew up working in his father’s law office in the Mississippi Delta. In addition to law, Stuart was involved in various business ventures, including building subdivisions, as well as owning or operating restaurants, a grocery store, and a farm. After time as a Russian linguist and serving in the U.S. Army Judge Advocate General’s Corps (JAG), Stuart says “it wasn’t too much of a stretch to lure me into being ‘the business guy’ for Red Wagon Creamery.”

“We wanted to start a business where we could work together, and that allowed us to highlight the local food bounty that we have in Oregon,” Stuart explains. “Since Emily had a background making ice cream, we felt it was a sneaky way to get people to uncouple from the ‘better living through chemistry’ that’s been pushed by big food companies, reconnect people to their local agriculture, and remind them that food has seasons.”

After “a little arm twisting,” Red Wagon was born.


See Also:  Maternova and the Business of Saving Lives

The little cart that could

During 2010 and 2011, Stuart and Emily spent nine months developing recipes, “using our lucky neighbors as taste-testers.”

Like any business startup, the Philips faced challenges; plus, the trade-off of skipping shortcuts is having a harder road.

“Licensing was a big issue,” Stuart says. “Since we make everything from scratch—not buying in a pre-made base mix like most places—we have to pasteurize our base, and are licensed as a dairy plant. Our first glance at the Pasteurized Milk Ordinance was daunting, to say the least.”

No kidding. At 388 pages, the PMO’s 2011 Revision from the Food and Drug Administration (FDA) is the current iteration of a document going back to 1924, to regulate hygiene and practices in the nation’s milk industry.

In order to operate according to their vision, Red Wagon had to comply with every regulation, from permits to labeling and more.

However, by working closely with the Oregon Department of Agriculture and learning through their own research, Red Wagon found its way. By May 2011, they were ready to see if the public was as receptive as their neighbors. Using six home Cuisinart® machines to make their from-scratch ice creams, they fixed up a refurbished Häagen-Dazs® pushcart that they found on Craigslist, and Stuart and Emily began serving six flavors around the local area.

“People in Eugene loved it,” Red Wagon says in a funding prospectus (more on that in a bit). “In our second year, we bought a small commercial ice cream machine, added a second cart, and almost tripled our sales.”

See Also: What’s the Secret to Your Success? With Brian Wyrick of Robot Paper

The cash behind the cones

In 2013, Red Wagon opened a retail storefront in downtown Eugene and received a wholesale frozen dessert license from the Department of Agriculture. Again, sales tripled. “By the end of 2014, we were scooping from our shop, supplying ice cream to three other scoop shops in Eugene, and wholesaling pints to Market of Choice, Zupans Markets, the University of Oregon, and ten other grocery stores,” says the Red Wagon funding prospectus, noting retail, wholesale, and catering sales growth of over 1,100% since their first year of operation.

Increased revenue has gone hand-in-hand with public acclaim. Red Wagon has been named “Best of Eugene Frozen Treats” by local newspaper “Eugene Weekly,” and their ice creams have been featured in food blogs and magazines such as “Sunset” and AAA’s “Via.”

However, for their many accolades and opportunities, running the business has not been devoid of challenges.

Now that Red Wagon has a retail storefront, 20 full-time and part-time employees, and is building toward its expansion plans, Stuart keeps a tighter eye on cash flow. “We needed more working capital when we started, but didn’t have it. That made our first winter in the shop very lean, but we made it through,” he says. “Looking back, we should have found more working capital; however, having gone through that has made us frugal, so we scrutinize every purchase carefully, which, in the long run, will make us more efficient.”

On the retail side, Stuart watches per-customer spend and same-day sales comparisons. On the wholesale side, he watches the velocity rate. To keep track of the business side of the operation, Stuart uses QuickBooks online, a variety of spreadsheets specifically designed for Red Wagon, and Palo Alto Software’s LivePlan.

“We have leaned on LivePlan since we were a cart,” Stuart explains. “The service guided us into making our initial written business plan to get funding for our store. We use the revenue forecasting tools to not only plan, but to then set benchmarks to check ourselves as we progress. We are now in our third cycle with LivePlan, having used it to plan for our production growth here, and a third plan to start getting funding for our California expansion.” 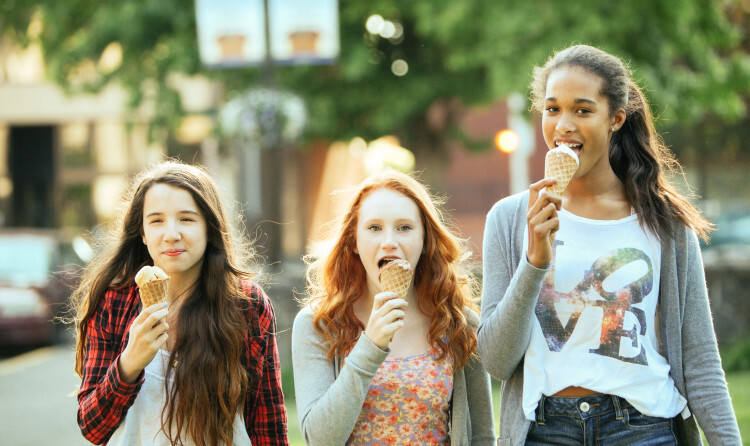 Red Wagon is now poised to expand into Portland and Southern Oregon, including wholesaling to larger regional grocery chains and adding more co-branded scoop shops. “We have a distributor who can handle growth,” Stuart explains. “We plan to expand by focusing on the Pacific Northwest, and expanding our ability to service all of Oregon.”

To do so, however, Red Wagon has a few things on their to-do list:

Red Wagon even changed its underlying legal structure. “We needed to transition from an LLC to allow investment opportunity,” Stuart says. “We chose the beneficial C corp because we are a mission-driven food business, committed to local food. We felt that the beneficial C corps status would allow us more flexibility in things like sourcing local produce without having to skin the farmer. We can pay a fair price, even though it may cost a fractional percent more. Also, having to produce an annual report will help us structure our efforts to make a difference through our business efforts.”

Red Wagon expects to need $120,000 to fund their expansion. To raise the capital, they’re taking advantage of a new program that allows them to approach an untapped group of potential investors: the Oregon public.

See Also: What’s the Secret to Your Success? With Jesse Thomas of Picky Bars

Hatching a new phase of business

Similar to programs in 15 other states, in January 2015 Oregon implemented new rules that allow Oregon-based companies to crowdfund small investments from state residents. Run by a nonprofit, Hatch Oregon is a state-specific cross between the stock market, where investors purchase shares in the company, but there is a risk of a loss; and funding campaign sites such as Kickstarter and GoFundMe, where backers can receive some sort of reward or return, and the campaign has a deadline. Hatch Oregon is similar to other programs across the U.S. that were authorized by Congress in the 2012 Jumpstart Our Business Startups (JOBS) Act.

As Red Wagon gets closer and closer to their funding finish line, Stuart Philips is looking beyond. Over the next five years, Red Wagon plans to expand into a “regional national” brand. “We are working to open a shop and production space in Southern California,” Stuart explains, “where we will retail and wholesale ice cream made using local California dairy and produce, and distributing to groceries there.”

Advice from an ice cream man:

As Stuart looks back over Red Wagon’s exponential growth and its first few years, he realizes he’s figured out a few things:

Despite Red Wagon’s growth, he and Emily also work to balance business with home life. “We have a 14-year-old daughter, and have to make sure that we are there for soccer practice, games, and dances.”

And when things don’t go as planned? “We cope with failure by binge-watching things on Netflix,” Stuart says. “‘Battlestar Galactica’ got us through a real rough patch.”

Despite setbacks and challenges, Red Wagon continues pressing on, bringing more from-scratch ice cream to a public with an appetite for freshness and authenticity. “Real ingredients cost more. However, we find that our ice cream is true to flavor: mint actually made with mint actually tastes like mint,” Stuart says. “It’s surprising to people, which is sad. We’ve become so accustomed to the pale imitations. So, while our ice cream doesn’t have a three-year shelf life, and the COGS is higher, in the long run, it’s doing exactly what we set out to do—make real food with real flavor.”

Do you agree with Stuart’s advice? Does your business have a similar success story? Tell us in the comments!

This article was originally published on the LivePlan blog.

Fantasy author, business writer, globetrotter, and beer writer Anthony St. Clair has walked with hairy coos in the Scottish Highlands, choked on seafood in Australia, and watched the full moon rise over Mt. Everest in Tibet. The creator of the Rucksack Universe series, Anthony has traveled the sights and beers of Thailand, Japan, India, Canada, Ireland, the USA, Cambodia, China and Nepal. He and his wife live in Eugene, Oregon, and gave their kids passports when they were babies. Learn more at anthonystclair.com.

From Food Cart to Award-Winning Restaurant: A Secret to Success Story

Do You Have a Start-ups Group in Your Area?

How to Prepare Your Small Business for Growth

From Food Cart to Award-Winning Restaurant: A Secret to Success Story

Do You Have a Start-ups Group in Your Area?