Entrepreneur Zack Price was selected to be a Project Glass Explorer for Google.  Catch up on Part 1 of his “Playing with Glass” series, this is Part 2…

It was 2003, 10 years ago, but I remember meeting Larry Page like it was yesterday.  Google was a private company and their CEO and co-founder was visiting his and my alma mater in Ann Arbor, the University of Michigan, where I had just graduated a few months prior and was bumming around getting my own startup off the ground. 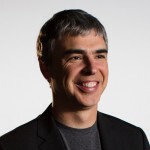 Here in 2013 Larry would sell out the Big House, but if you take the WayBack machine to 2003 you’ll learn he came to speak to a group of about 30 and literally told us Google would never, never go public. He said they had $125 million in the bank, what would they need public funds for?

He also told us about a new advertising model they were using called “Adwords”, where advertisers bid on keywords and only pay per click. Good stuff.

My frat bro and uber-entrepreneur Adam Zweibel started asking Larry about advertising his IT services online, and then I told Page about my publishing business.  That’s how Adam & I learned about search marketing and 10 years later both Doctor Computer and Price World Publishing still stand strong today.

As for Google a decade later, after an IPO and billions upon billions in ad revenue they are one of the largest companies in the world.  Larry reigns as CEO, and his partner in crime Sergey Brin, is working tirelessly to bring us perhaps the most innovative and life-changing technological product of our time – Google Glass.

I already told you all about how I got selected to have the honor of travelling to NY/LA/SF and shelling out $1,500 +tax to be one of the first to test the Glass.

As the Glass begins to roll off the production line (16 GB drive, 12 GB of that available to sync with cloud storage) this here blog shall talk some more about Playing with Glass… 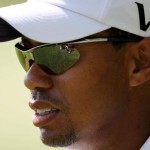 Shall we begin with my proposal of arming athletes with the Glass?  Imagine Tiger Woods, playing The Masters with them this past weekend.  What if Tiger were wearing Glass when he was leading the tournament on Friday when he hit a perfect shot on the 13th hole, which hit the pin and ricocheted right off the green and into Rae’s Creek?  Tiger was so unnerved, that when he took a penalty drop he dropped his ball in the wrong spot, incurring another two-stroke penalty!  That would have been interesting to see from Tiger’s eyes (streamed live to his website with Nike commercials).

Social media maven Ashley Mooney is also a Glass Explorer and I’m already nicknaming her the Glass Content Queen. She’s ready to capture everything from family events and vacations to live-blogging, interviewing, and podcasting.  Mooney already wears spectacles which I imagine is a huge advantage to Glass Explorers along the learning curve.

Ashley’s interviewing idea is a good one … last night I was at my home away from home, 1871, where I shot the shit with the Startup Grind King of Chicago, Tom Denison.  He’s also a Glass Explorer and I can totally see Tom sporting the Glass on stage as he interviews incredible entrepreneurs just like he did last night.  Tom & I are teaming up to offer all grinders of last night’s event a free test-drive of our Glass.

Okay, you can stop clapping now … we’ve had our fun.  Let’s be serious for just a few moments and talk about how Google’s Glass can change and save lives…

Ultra blogger Robert Scoble (The Scobleizer) is getting his Glass TODAY.  This guy alpha & beta tests so many gadgets he should have the greek alphabet tattooed across his avatar’s chest.  Speaking of cutting edge products … have you downloaded the Flipboard app yet? Scobleizer has an amazing Flipboard called “Glassholes“, it’s all about Google Glass.

On the eve of receiving his Glass, Scobleizer begged the question on FB:  “Would there be a privacy backlash if Google Glass identified the Boston bombers?”

Within 21 minutes it had tons of conflicting views and 89 FB likes, including a thumb in the air from the famous entrepreneur Tatiana Aleksandrovna, (and let me tell ya, she’s a hard one to impress).

Everyone had an opinion on Robert’s question to the masses, but when Scobleizer spit out the half-sentence “we all know face detection is possible and probable within five years” I was sold.

GOOGLE GLASS COULD HAVE IDENTIFIED THE BOSTON MARATHON BOMBER.  Or at least photographed or streamed video to a secure cloud where law enforcement could locate, then recognize the terrorist who committed this terrible crime. With face recognition tools who knows how quickly an arrest could have been made.  This is all speculation, of course, but you can see the potential of Glass as a crime fightning tool. 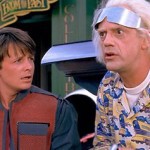 And it’s a valid point about privacy.  It will be interesting to see where Glass will be allowed (and who will even notice).  Scobleizer is already stirring up mischief about where he will wear the Glass.  He speaks all over the world, and just in the next week he’ll be wearing the Glass in Vegas Casinos and the Red Light district in Amsterdam (and maybe a few coffee shops).

He also says that just for fun he’s going to drop by Marc Andreesen’s office to see if he can get past the front desk with Glass on.  In fact, that’s the first thing he did.  I don’t think he’s safe at A16Z.

I’ll bet you anything Andreesen is “makin it rain” for all developers who can design apps specifically for Glass.  Sometimes I wonder if Andreesen’s bald head is a crystal ball that you can rub and see into the future … the guy is a genius (and from the Midwest).

Last month I was not yet a Glass explorer, and I was hanging out down in Austin for SXSW with my new BFF fellow ginger entrepreneur Ryan Holmes. 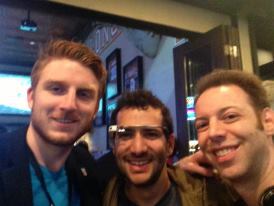 He’s telling me all about Google Glass rumors he’s heard, as simple as ordering Chipotle from Glass to a housing app that brings up real estate info as soon as you look at a property. He then starts telling me about a grumpy cat face replacement app when we were both stopped cold in our tracks…

There right in front of us were two Glass Explorers sent to Austin from Google HQ.  These secret agents refused to answer any of our questions for this confidential device. Holmes & I contemplated kidnapping them until we realized the Glass probably has GPS location services.  No shit Sherlock. Oh well, it’s the thought that counts. We settled for a photo that went immediately up on FB and I was all set to call it a night.

I’d really love to leave you with that, but there’s One More Thing (Steve Jobs voice): 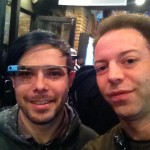 I’m walking back down 6th street in Austin, researching (googling) everything I can about the Glass.  It turns out the guy from the photo wearing the Glass was Timothy Jordan, Developer Advocate for Google+. Tim’s essentially the Google Glass ambassador sent from Mountain View.   (good thing we didn’t kidnap him, I bet he reports directly to Larry).

Tim ended up doing a 50 minute presentation about Glass (including demo) while in Austin which shows us the future. It is seriously amazing. I love SXSW, it’s the most tech-savvy week on earth. Here’s the Mashable article, and here’s Tim’s live demo:

So now I’m feeling pretty good.  I’ve met the Glass ambassador and my Glass is coming soon. I even got a round of applause at StartupGrind.  Ya can’t spell applause without “app”. Maybe I can do this tech-blogger thingy afterall. But it’s taking over my digital life:

I try not to think about it, but I’m starting to accept the fact that Steve Jobs is really gone. It’s been 3 years since the iPad came out.  Larry Page and Sergey Brin, have come a long way in 10 years from a private company speaking to a small classroom of Michigan entrepreneurs.  Steve Jobs is gone, so Google Guys, Tech-Nation turns it’s lonely eyes to you.

This is Google’s chance to create their own hardware+software device and dominate the market of wearable computing.  Until then, we anxiously await the hope of a device that will improve our lives for the better and possibly save some along the way…

Click here to read about Steve Jobs’ career if he were a baseball player.