Should You Consider Using Bitcoin?

Recent news on the Cyprus banking crisis has brought Bitcoin back into the public view. As the total value of Bitcoins surpasses $1 billion and more merchants jump on the Bitcoin bandwagon, you may be wondering if you should look into Bitcoin yourself. Let’s take a closer look. 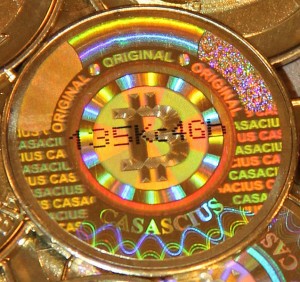 Founded four years ago by an anonymous hacker who calls himself “Satoshi Nakamoto”, Bitcoin is a digital currency that operates independently of any government or financial institution. Bitcoins are created by computers, who “mine” them by cracking a preset algorithm. Since the process of creating Bitcoins is computation-intensive, the supply of Bitcoins is expected to grow slowly and steadily. Bitcoin transactions are managed by an online network, making them theoretically immune to currency speculation or manipulation by central banks.

The most important benefit of Bitcoin applies to businesses that make frequent international payments: Bitcoin allows you to send reimbursements instantly to virtually anywhere in the world without incurring currency exchange fees. And this isn’t just a theoretical benefit – payment provider Expensify recently added Bitcoin to its list of accepted payment options for its network of 200,000 partners.

Accepting Bitcoin can make you a novelty

The number of online merchants accepting Bitcoin is still small enough that you may be able to generate some decent branding and publicity by deciding to accept Bitcoin. You can even accept Bitcoin at the checkout register through use of QR codes. There may be a short window on this opportunity though, as it is already accepted by a growing number of online communities, including WordPress, Reddit, and Etsy.

Bitcoin Could Be a Currency Hedge

Proponents frequently tout the stability of Bitcoins. In reality, the currency is still very new, and prices can fluctuate dramatically as Bitcoin gains more public attention as a potential investment alternative to gold. But barring some catastrophic crash in the Bitcoin market, prices are expected to continue rising in the years to come. Instead of hedging one currency against another, Bitcoin attempts to hedge against the entire global currency system as a whole – a novel approach if you hold multiple currencies and aren’t interested in gold.

There are some inherent risks to using a digital currency. If you lose it, it’s gone, so keep your Bitcoins safe – they’re just snippets of code and they can be deleted. There is also the possibility of future regulation, but this is difficult since Bitcoin is an international phenomenon and not under the jurisdiction of any specific country. In addition, the U.S. Treasury Department announced that since they don’t consider Bitcoins legal tender, they see no reason to regulate them.

The primary risk of Bitcoins you should be aware of originates from the same community that created them – hackers. Earlier in the year, an anonymous hacker tampered with a Bitcoin brokerage and sent prices tumbling from $27 to $2 in minutes. Luckily, prices quickly rose back to the previous level, but this illustrates the fact that Bitcoins are a new technology and they’re still working out some significant bugs. Still, it could be a unique opportunity, cost-saver, or at least an interesting novelty for the adventurous entrepreneur.

Have you looked into accepting Bitcoin payments, or do you already use Bitcoins for purchases? Chime in on our comments and tell us your experience.

Dave Cannon is a social entrepreneur based in the Pacific Northwest and contributor to Bplans.com. After attending the BYU Marriott school he co-founded and raised over $100,000 for FindProz.com, a microenterprise e-commerce platform.

Could Bitcoin Fund Your Business?

Why Your Payment Portal Can Make or Break Your Online Business

Could Bitcoin Fund Your Business?