So here’s an interesting quote:

Growth is at least as much discipline and execution as creativity.

That’s from Mike Greenfield, in Six Steps to Growth: What I Learned as 500 Startups’ Growth Hacker In Residence, on Numerate Choir. 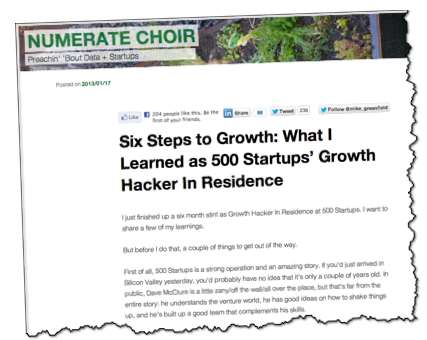 Interesting concept. It should be obvious. But there it is, standing out, and worth stopping and quoting, precisely because it should be obvious but isn’t. Mike is musing about the term “growth hacker.” He goes on:

It turns out that there aren’t usually easy solutions to growth challenges. This is where the hype around the term “growth hacker” can be dangerous. Hacking implies something weird and unpredictable. It evokes a sense that the perpetrators are more crazy artists than precise scientists, that their methods are unusual and tough to replicate. And it implies that there’s some sort of obscure code that can be cracked to yield the magic growth solution.

Which he says a consumer startup with a good product can manage using six steps. He calls it “a fairly straightforward series of steps.” I call it delightfully simple:

And repeat the process as long as it works (that’s my addition). Mike adds more detail.