We talk about baby boomers starting businesses, and generation Y (alias millennials) starting businesses, so how about 72-year-old Shirley Kuhnley and the Sweet Spot Bakery-Deli in Monroe, Oregon? She opened in July. I saw the story by Joe Mosely in the Eugene Register Guard. Monroe is a very small town in the Willamette Valley about half an hour north of Eugene. 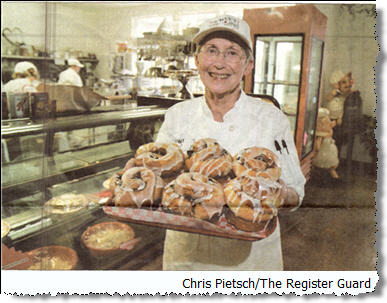 She was 69 years old three years ago when she graduated from a nine-month culinary arts class in Portland, Oregon’s largest city. Then she worked a year at another bakery, and she took a year to establish her business, refurbish her location, and open up. According to the story in the paper, Shirley said:

“You know, if you’re not busy, you sit home, get fat and die — mentally and physically. That sounds kind of harsh, but it’s true. Someone asked me once: ‘do you consider yourself a senior citizen?’ I said ‘no, I don’t have time.'”

Mosely says this is her third career, but only if you don’t count raising five children by herself before she married her husband in 1977. She worked as a surgery nurse in Texas while her husband taught microbiology at Texas Tech. They moved to Monroe, Oregon, when he retired in 1981. Shirley worked as a nurse again in Eugene, and then ran an antique shop in Monroe for more than 12 years before shutting it down to go to the culinary institute in Portland. The bakery is in the same building that used to house the antique shop.

Shirley estimates she’s put in about $200,000 in the Sweet Spot. “Every business starts out in a hole. That’s just how it is,” she told Mosely.

But she’s also mapped out a business plan that she believes will lead to profits within a few months. In addition to retail bakery and deli sales, her wholesale business should help level out fluctuations in off-the-street customers.

Being 72 years old today makes Shirley about 11 years older than the 61-year-old people born in 1946 who are the oldest of the so-called baby boomers. I haven’t visited the bakery yet, but I intend to.