Entrepreneur Zack Price is guest blogging his experience this week on the 2013 StartupBus as it makes its way from Chicago to SXSW in Austin. On StartupBus a team of strangers, traveling at 60mph, have about 72 hours to conceive, build, and launch a startup. You can catch up with Post #1 in this series here, Post #2 here, and Post #3 here.

I was ready to rock this pitch.  I had it perfected.  I even practiced pitching to a complete stranger, while taking a leak in a truck stop bathroom in a town called Iowa, Louisiana.

I’m sure they know all about crowdfunding in Iowa, LA.  Three’s company in this town, four or more certainly constitutes a “crowd”, maybe even a mob… especially in the men’s room.

Our team NextChaptr was ready to win this thing for Chicago, for 1871, and for all the Midwest. 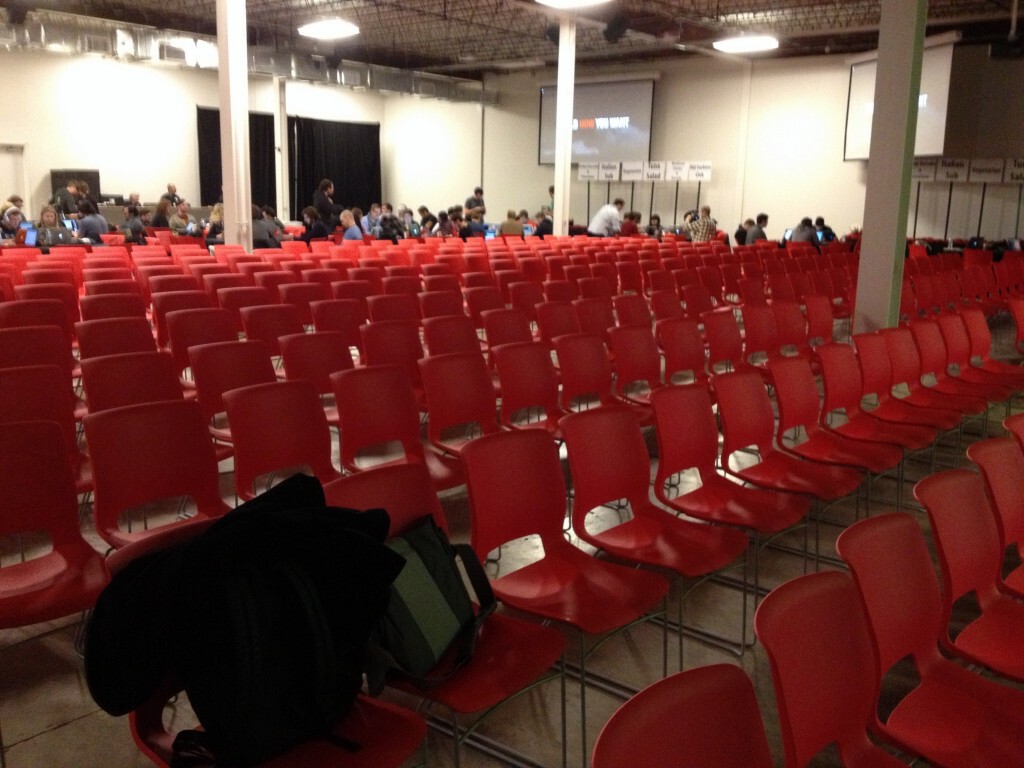 and there she was – every nerd’s dream woman, soon to be my arch-nemesis – Falon Fatemi.

Hey there, do you come here often?  Why yes, she does – it turns out Fatemi won this competition last year, and is the Silicon Valley bus conductor this time around.  She’s the real deal Holyfield.

The odds were against us from the start, 30 teams and only 12 advanced.  And it all depended on these next few precious minutes.  It all depended on what these three judges thought of our team, and as the team pitch-man, it all rested upon my hairy shoulders.

I stepped up to the mic, and began spittin’ my shit:  “We’re NextChaptr, a full-service book publishing company … with a crowd-funding twist…”

I made it through about 20 seconds into my pitch, and then … “it” happened.  I wish it never did. 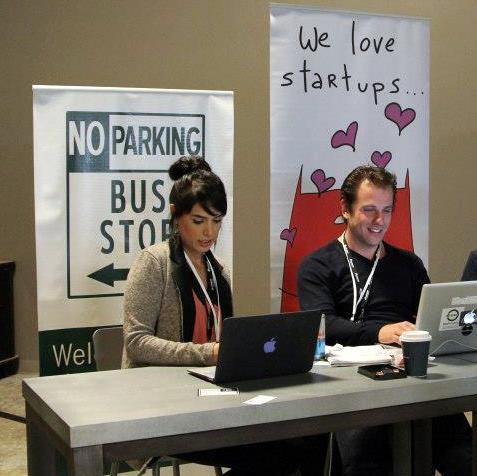 Her piercing brown eyes, like two bullets that saw right through me and into my soul for just an instant, and BOOM.  I was done.  Cooked.  Stick a fork in me.  Fineesh.  Adios.  Sayonara.

I blanked.  Mental fart.  Whatever you wanna call it.  I CHOKED.  I forgot all my lines and stared horrified at the judges.  They didn’t seem to know what was going on, and returned my silence.  Awkward Silence. It’s all true, folks.  I could not make this stuff up even if I tried.

Elias & Jon tried to be nice.  Falon smelled blood and attacked.  She broke the ice by grilling me with question after rhetorical question about our business model.  She’s sharp.  Really really really sharp.  Like a knife.  Like a bird’s beak.  Like a shark’s teeth.

For the first time all week I’d been tested, and Fatemi destroyed me.  Tore me to freakin’ shreds.

Falon picked apart our concept with surgeon like precision, cutting up our marketing plans, slicing and dicing up our revenue streams, chopping down both the supply and the demand side of our chicken/egg marketplace, and then twisting the dagger in our back: “So you’re really just KickStarter for books, huh?”.  I could barely get a word in.

Everything that I was supposed to cover in my pitch was now exposed, and coming back to haunt us.  We looked unprepared.  Silly.  Sloppy.  Sorry.  Stupid.

It reminded me of the movie 8-Mile, when Eminem’s character, a freestyle rapper named B. Rabbit, got handed the microphone in his first real battle.  After being hyped up by his mentor “Future” (Mekhi Phifer), Rabbit took the mic on stage and completely choked.  Choked. CHOKED.

He opens his mouth, but the words won’t come out. He’s choking now. Time’s up. Over. Ouch.

I felt like (Eminem) in 8 Mile when he choked during an on-stage battle, with his mentor & team watching. He even wore headphones around his neck like I do.

Just like Future did for B. Rabbit, I was hyped up beforehand by my mentor Ravi Singh, and I let him down.  Big time.  I could see the disappointment in my teammates’ faces.  In Ravi’s face.  They tried to tell me I did fine, but I didn’t.  I mushed hard.  And I was out of mulligans.

Luckily for us my teammate, personal pitching coach , and grand-master pitch-man himself, Chris Courtney, had grabbed the mic and fed the judges tasty bits of info that they enjoyed while I tried to revitalize myself for more Q&A.  I regrouped and handled the rest of the interview fine.

Maybe – just MAYBE we could sneak into the top 12.

Nevertheless, for the next 6 hours I was down in the dumps. I killed time BS’ing with brilliant minds like Brad Smith & Fergus Handley. Fergus would eventually play a huge rule in my future keynote.  For now, I helped him look for his iPad Mini which he lost. Fergus – you’re 6’8″ man. Why do you have an iPad Mini in the first place? Shouldn’t you have an iPad Large, or something? 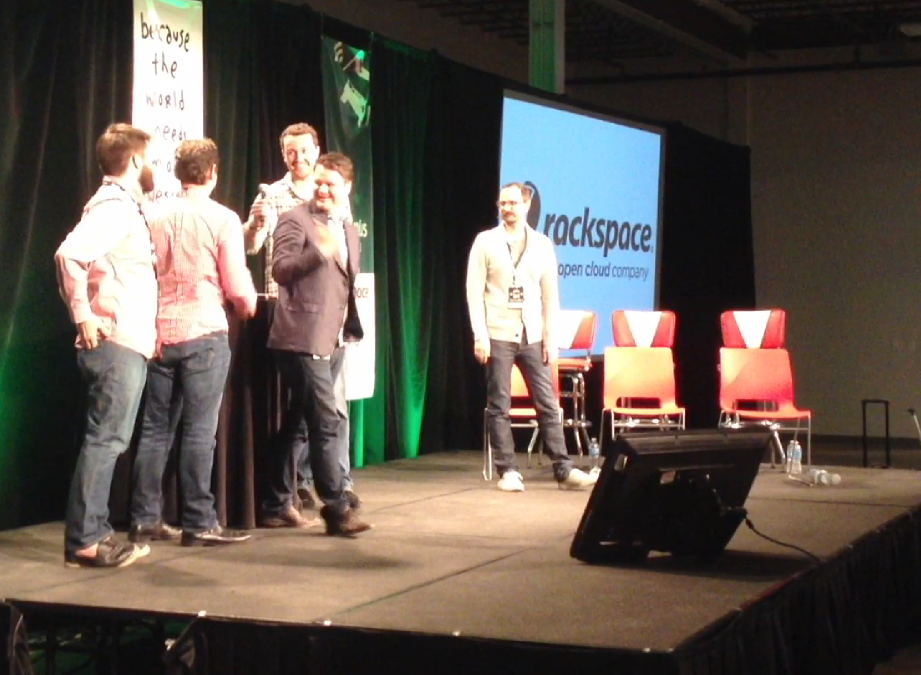 I still laughed and smiled.  It’s hard not to while around all these great entrepreneurs, but deep down I was crushed, and the suspense was killing me.

Then the 12 semi-finalists were announced, and NextChaptr was one of them… 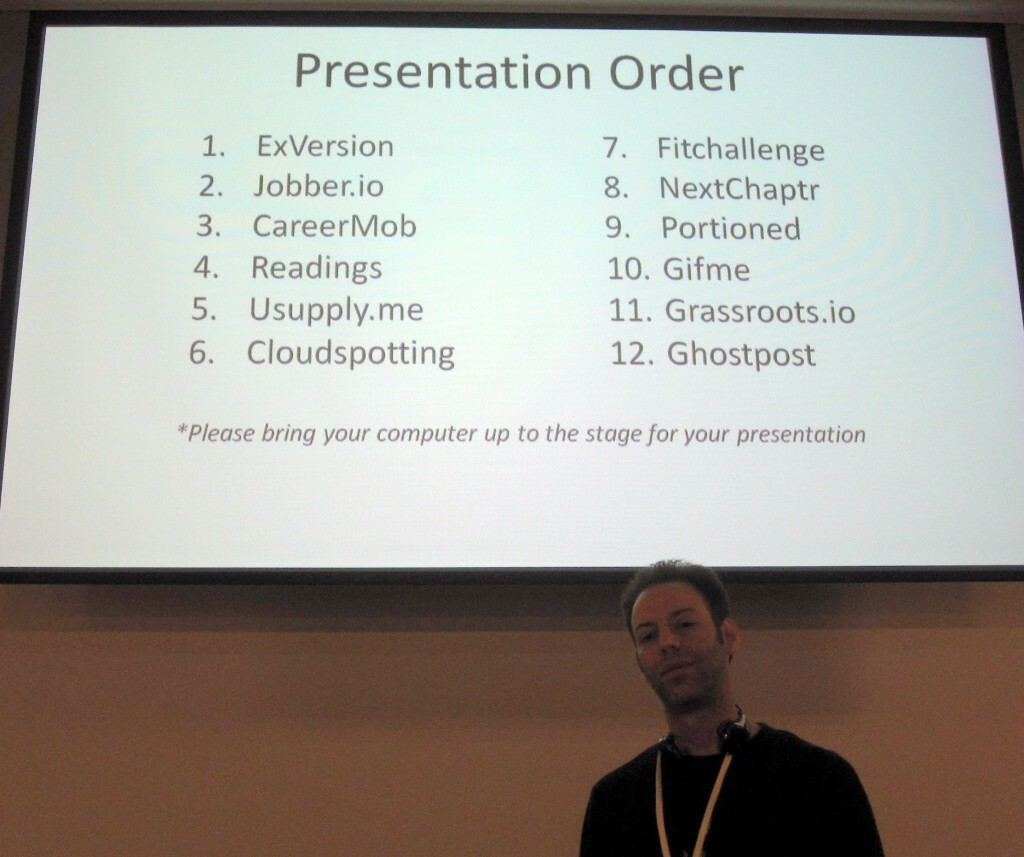 That’s right.  We advanced and would be performing later that night, on the main stage, in front of all of our peers as well as a panel of judges which will include Robert Scoble.  This may have been the break I needed.  I promised myself and my team, I would not choke again.

We winning this thing… just don’t let me play pitch & catch with Falon Fatemi ever again.  Keep her far, far away from me… for my own good.

And don’t forget to live life outside your comfort zone.  Be vulnerable.

Stay tuned for Post #5 “From Choke Artist, to Pitch Expert in 24 hours – I got Scobleized”.  Yup, that’s literally my ass on Mashable the very next day: “How to pitch your Startup in 3 minutes“.  Those jeans really show off my curves…

Live From the Startup Bus – Taking a Dump, a Photo Dump (Post #3)

Live From the Startup Bus – Taking a Dump, a Photo Dump (Post #3)