Startup from Both Sides Now

Always the paradox. The best of times, the worst of times. Take a look at this chart: 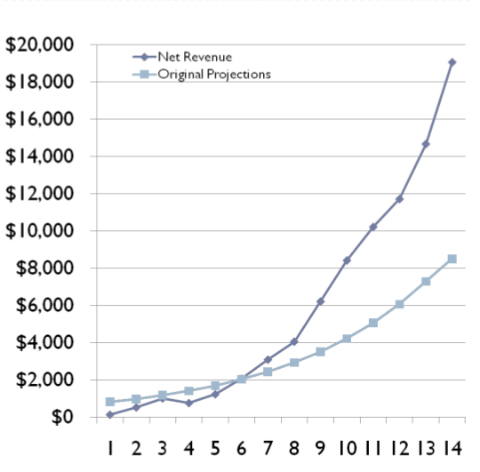 For several days now I’ve been trying to figure out how to tell this story. It would be a great story if it had a happy ending, and it still can. But it hasn’t yet. I really like Mike Glanz and HireaHelper.com, his startup business. That’s Hire a Helper’s ramp-up chart, actual numbers compared to projections showing here. I had a meeting with him in person two weeks ago Monday. I posted last year on his quest for financing through TheFunded.com.

He’s a straight talker, not well connected, hoping to build his business through a combination of taking an idea and implementing it with hard work. He likes programming, he likes his site, and he’s proud of what he’s done and how he and his partner have worked on it. He’s proud of how his wife supports the idea. That’s the taking-off side of the picture.

Then there’s the dark side: costs, particularly some unforeseen legal costs, going way over projections. Not getting financed. Living without enough money. Trying to hold on. Needing a good lawyer, and more company building savvy. One thing I particularly like about Mike, a soft-spoken college grad, is that he knows what he doesn’t know. He knows he wants advice.

That’s the world of startups. Mike and his wife and his partner are looking at it, as in the song written by Joni Mitchell “From Both Sides Now“. Great initial sales, lots of enthusiasm, sudden burst of unexpected costs, really needing to raise money.