This is a true story: I saw this happen a lot. My daughter Sabrina has been pregnant twice since 2003, and she likes coffee. I was with her and her husband Noah countless times getting coffee while she was pregnant. She always ordered decaf because pregnant women should avoid caffeine. Sometimes she’d take a sip and wonder whether the server had made a mistake or perhaps between the three of us we’d gotten the cups mixed up. Then there were times as well, when we were sitting at a restaurant and all three cups had the same color, we wondered whether the server had slipped up. 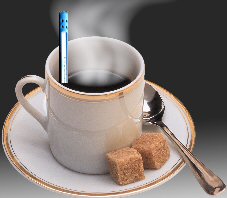 Lots of people order decaf coffee for many different reasons. Some reasons are more important than others. In fact I’ve read that some restaurants serve decaf to everybody who orders coffee, whether they want decaf or not, just to avoid accidental liability for unintentionally serving coffee to people who have health problems with caffeine.

Solve this problem with a business that produces a swizzle stick meter that indicates how much caffeine per ounce in a cup of coffee. It should cost no more than the price of one good dinner, but doesn’t have to be much less than that either. It should be highly portable, no bigger than a pen, and of course it should also be reusable.

You can sell it to the end users directly or, depending on specifications, sell it to the intermediaries. People who like coffee but worry about caffeine content will pay to own one. Restaurants should have several, as a courtesy to their customers. They could have two or three at the milk and sugar dispensing places at coffee shops like Starbucks. Businesses that didn’t make them available would be suspect.

I have no idea of the science involved, just the thought that it’s an unfilled need. And if you can do it, please do, you’re welcome to the idea. And if you already do it and I don’t know about it, please add a comment here to tell me and the rest of the world.