How’s this for a startup success story? Avaaz.org started 17 months ago. It now has more than 3.2 million registered active members and last week raised $1.5 million in aid for Burmese cyclone victims in three days. Recognizing some problems with flow of aid through normal channels, founder Ricken Patel connected with Burmese monks to distribute the aid.

How did Avaaz do it? By building a state-of-the-art contact management system that was streamlined exactly to its needs, and then building a network of talented campaigners, translators and a technology team from around the world without needing to have a single office. The end goal is something that’s been done before–an online petition and donation site. But in the back end, both from a team assembly and a technology standpoint, Avaaz has innovated to be built from the ground up as a hyper-international and agile organization that can respond to a world crisis in a matter of hours.

It is an organization with a mission:

a new global Web movement with a simple democratic mission: to close the gap between the world we have, and the world most people everywhere want. Across the world, most people want stronger protections for the environment, greater respect for human rights, and concerted efforts to end poverty, corruption and war. 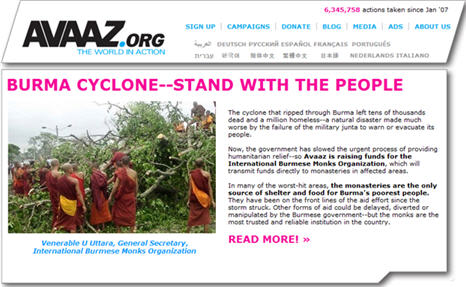 Not that technology doesn’t require a lot of hard work. Avaaz uses an innovative blast engine to fine-tune e-mail messages with detailed testing. And it was built from the ground up to deal almost simultaneously with five main languages and then very quickly with six others. But a lot of its success has to do with the old-fashioned business of saying the right thing to the right people. Since the beginning, it’s focused its efforts on bringing people together around causes that unite, rather than divide. Recently, global warming and political problems in Burma and Tibet. For example, try its video ads.

The technology used is all LAMP (linux, Apache, PHP and mysql, a strong combination of open-source, readily available software).

And it also takes funding. And in this case, the organization is now funded by its more than 3.2 million members, which is another major achievement. Here’s more of the history:

Avaaz.org was co-founded by Res Publica, a global civic-advocacy group, and Moveon.org, an online community that has pioneered Internet advocacy in the United States. Our co-founding team was also composed of a group of global social entrepreneurs from six countries, including our Executive Director Ricken Patel, Tom Perriello, Tom Pravda, Eli Pariser, Andrea Woodhouse, Jeremy Heimans and David Madden. Avaaz is lucky to have the founding partnership and support of leading activist organizations from around the world, including the Service Employees International Union, a founding partner of Avaaz, GetUp.org.au, and many others.

Here’s another specific number: in its 17 months, Avaaz members have taken 6,345,719 (as I write this) actions. Actions are things like making a donation or signing a petition. Avaaz’s goal is to be member-funded. First it had a campaign that was tremendously successful just getting e-mails, petition, 1.7 million members just on Burma.