The other day somebody asked me how to get started on Twitter. I decided to write my answer down and post it here, because I thought it might be useful to others. If you’re already a Twitter user, then this post is probably not for you. Sorry.

If you aren’t a Twitter user and don’t want to be, then this is not for you, either. Sorry again. 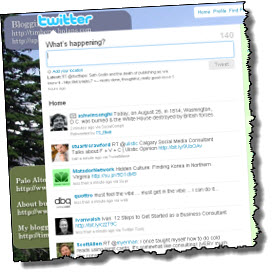 But if you aren’t a Twitter user yet and you’d like to be, I can help. I took the time to think it through and write it out, and here are my step-by-step suggestions.

I like Twitter; I use it a lot, and I recommend it. It seems to me like the debate about Twitter is calming down now, meaning that few people care that much who uses it and who doesn’t. But if you’re an entrepreneur, and you haven’t tried it, I would recommend that you do. It’s not about what people are having for lunch–you don’t have to follow those people –or annoying sales pitches–because you don’t have to follow those people, either. It’s about what’s up, what’s interesting and what’s going on.