Steve Jobs as Joe DiMaggio – From Cupertino to Cooperstown

My last blog ended with a Simon & Garfunkel reference to Steve Jobs as our generation’s Joe DiMaggio and how Tech-Nation turns it’s lonely eyes to the Google guys – Larry & Sergey.

Then I realized something … Steve Jobs’ consecutive string of hit consumer devices is quite similar to Joe DiMaggio’s 56 game hitting streak. But Jobs died, he didn’t strike out.

If Steve Jobs’ career was as a baseball player, consider this here blog the back of his baseball card, a special Commemorative 2013 Hall of Fame edition: 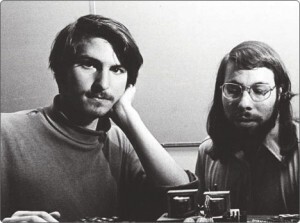 In the 1970’s Steve Jobs came up through the minor leagues with his technical co-founder Steve Wozniak developing illegal blue boxes that could dial long distance around the world for free.

The Steves gathered up the funds to develop the Apple I, essentially a circuit board geeks from the Homebrew Computer Club could purchase in July 1976 for $666.66 and build their own computer like the one Woz had.

The following spring, Jobs got the call up to the Big Leagues and he immediately hit for power. On Opening Day, April 16 of the historic 1977 season Steve Jobs & Steve Wozniak hit back-to-back leadoff home runs with the Apple II.

Woz won the gold glove award and triple crown that year, designing the whole damn Apple II himself… hardware AND software. Jobs ended up with the Cy Young, pitching the concept of this machine in every home. THE PERSONAL COMPUTER.  IMHO a turning point for all of mankind.

Do you have 46 seconds to hear Steve Jobs’ outlook on life?  I sure hope so, it’s already changed mine:

In case you’re at an open cubicle or your boss blocked YouTube from your office network, here’s what he said:

When you grow up you tend to get told the world is the way it is and your purpose is just to live your life inside the world. Try not to bash into the walls too much. Try to have a nice family, have fun, save a little money.

That’s a very limited life. Life can be much broader once you discover one simple fact: Everything around you that you call life was made up by people that were no smarter than you and you can change it, you can influence it, you can build your own things that other people can use.

Once you learn that, you’ll never be the same again.”

In the decades spanning Jobs’ career he would end up hitting for both power and precision: 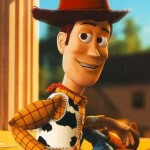 If that wasn’t enough, Steve Jobs officially hit for the cycle when he resigned from Apple, started another computer company called NeXT, then ended up buying Pixar for $10 million. Steve stepped up to the plate and knocked out Toy Story, A Bug’s Life, Toy Story 2, Finding Nemo, Toy Story 3… the hit streak continues!

Pixar was suddenly worth billions – And when Steve merged NeXT with Apple years later, he was still head of Pixar – CEO of two NASDAQ companies! That’s like DiMaggio playing for the Yanks & Red Sox … at the same time.

Disney eventually bought Pixar for $7.4 billion, Steve Jobs becoming Disney’s single largest shareholder.  Remember, this has nothing to do with Apple or selling electronics at all, this was just Steve being Steve. 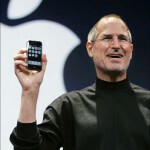 He was an all-around 5-tool player, Jobs was an expert on every facet of the game.  He even stole home plate with the “swipe” of his thumb – the entire telecommunications industry disrupted out of nowhere when he released the iPhone in ’07. Treo and Palm, Nokia and Rimm – all crushed.  Apple’s are much more delicious than BlackBerry’s anyway…

A computer the size of a phone!  The internet in your freakin’ pocket.  That could have been it.  Voted into the Hall of Fame on the first ballot joining the legends of the game in Cooperstown.  Cupertino sounds a lot like Cooperstown … don’t ya think???

But it wasn’t about the money for Jobs, he played ball for the love of the game.  Steve could have rode off into the sunset with billions in cash…

BUT THERE’S ONE … MORE … THING

The Devil himself was on the pitchers mound wearing a Windows Vista cap and the uniform #666 with “Satan” stitched in red across the back. El Diablo brought his most feared heat that night; life’s curveball … pancreatic cancer – the deadly type.

Jobs stepped into the batter’s box while the great Umpire of Life announced from the heavens above that the count was full … 3 balls and 2 strikes – Live or Die.  Mr. Jobs better swing now or take the long walk to the dugout … 6 feet under ground, no re-entry.  This was the final pitch and Steve knew it.  Play Ball! 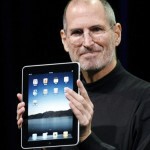 With a nod to the tech-gods and tears about to flow – like a movie scene straight from The Natural, he closed his eyes and swung with all his might – and just like he did in 1977 with Apple II…

Fireworks burst around the world and the fans went wild.  Everyone from Cupertino to Cooperstown to Cambodia to China. Every man woman and child’s face lit up when they played with Steve’s toy. The first real tablet, with multi-touch display! It’s magic. It just works. A career ending walk-off grand slam.

HE BROUGHT US THE PERSONAL COMPUTER IN 1977 — AND HE DESTROYED IT WITH THE TABLET IN 2010.

Steve Jobs died a year later.  He was 56. He had so much more to give.

There are no extra innings in this game of life, no foul balls, and no one ever made the Hall of Fame by watching a 3-2 pitch go by.

So take the bat off your shoulder. Think Different. Put on a black turtleneck and some jeans and SWING FOR THE FENCES. Die trying to hit home runs.

See you in Cupertino … I mean Cooperstown.

Watch Steve’s commencement speech at Stanford in ’05 when he told us he had cancer and to “Stay Hungry, Stay Foolish”.