With the high-tech world all abuzz about tablet computing, I enjoyed Steve King’s Lessons from OLPC post today, about the One Laptop per Child (OLPC) initiative and its version of the tablet computer 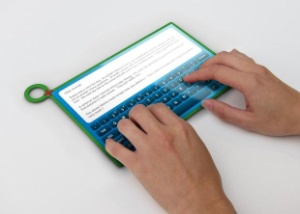 Steve put the illustration shown here on his Small Business Labs blog post. Here’s his summary of the design specifications:

Their new tablet will be made of a single sheet of flexible plastic that will be unbreakable. The hook on the corner will be used for carrying the PC and the price goal is less than $100. Low-cost components mean less power than a full-sized PC, but plenty of juice for almost all PC users.

I’ve been a happy user of tablet computers for several years now, and I’m eager for the Apple tablet to appear because I want to own one. I’ve been using Motion Computing tablets mostly.

But Steve’s right. One of the most interesting developments in computing is the low-cost student laptop. Even now, it’s because of OLPC that we can get decent netbooks for $300 or less. This is a trend worth watching in the future.