At Palo Alto Software, we pride ourselves on the wide variety of sample business plans that we offer in Business Plan Pro.   From car wash to pharmacy and most everything in between, there are plans that entrepreneurs will find to help them start their particular type of businesses.   But below are 5 actual “ventures” that, well….let’s just say we don’t have sample plans for.    If you know one of these people…have them give us a call! 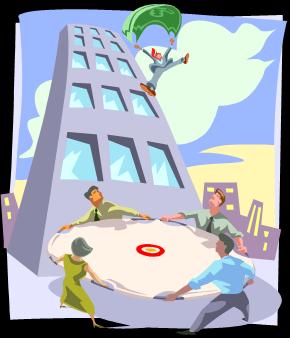 •   Wing Suit Business:  At least a half-dozen groups in five countries are seriously engaged in the quest to show that man can fly through the air and land without a parachute, according to a December New York Times report. “All of this is technically possible,” said a physics professor, referring to the wing suits fliers are testing. “The thing I’m not sure of is … safety.” Some wing suits have slowed vertical descent, briefly, to about 30 miles an hour, though the fliers were still moving horizontally at about 75 mph, which is why all testing is done with parachute backup. American Jeb Corliss believes he could land, even at 120 mph, provided that his neck were protected by a sturdy-enough frame on the wing suit. [New York Times, 12-10-07]

•    Fake Vomit Manufacturer:   A warehouse on Chicago’s West Side is “the world capital of fake (latex) vomit, where it’s still made the old-fashioned way, ladle by ladle, formed and coagulated,” reported the Chicago Tribune in December. Though it is not as popular as 50 years ago (7,000 units sold yearly, compared to 60,000 then), Fun Inc. President Graham Putnam said, still, “It’s the best vomit on the market.” According to the awe-struck Tribune reporter: “The texture is soft and sturdy, pliable and complex, with ridges of multihued solid chunks looking like a jagged lunar landscape … perfect for the bathroom, refrigerator, auto seat or sidewalk.” [Chicago Tribune, 12-12-07]

•    Wedgie Prevention Services: Twins Jared and Justin Serovich, age 8, of Gables Elementary School in Columbus, Ohio, made it to the finals of a state inventors’ competition this year with their special boxer shorts. The twins’ knickers used fabric fasteners to hold the seams together thus making it nearly impossible for the wearer to be given a “wedgie.” [ABC News-AP, 11-2-07]

•    Holy Merchandise!: Leading Economic Indicator: Evangelical Christians, among all people of faith, seem excited to purchase products that reinforce their religious values, according to a marketer cited in a December Denver Post report, with the result an explosion of Jesus-themed merchandise such as Jesus riding a bull, surfing and playing soccer, Jesus air-fresheners and Grapes of Galilee wine. (Among the tackier products, according to a November report in London’s Daily Telegraph, are “thongs of praise” underwear with an image of the Madonna and child, and a template to place on a bread slice in an oven to create toast with the Virgin Mary’s likeness.) [Denver Post, 12-22-07; Daily Telegraph (London), 11-25-07]

•    Hybrid Bra Manufacturer:  Not actually for sale yet is bra-maker Triumph International’s prototype “chopstick bra,” shown in November in Tokyo as an environment-friendly demonstration project. The bra houses two reusable chopsticks (to publicize a national campaign to discourage use of disposable ones), which can also be positioned to enhance the wearer’s cleavage. [Reuters, 11-7-07]

Some information courtesy of www.newsoftheweird.com