I posted the other day about unlikely businesses, like the small repair shop here in Eugene that specializes in fixing electric shavers.

Talking that over with a couple of people around the office reminded me of another unusual business I saw recently: a midway stand on the Coney Island boardwalk called, charmingly enough, Shoot the Freak. See for yourself: 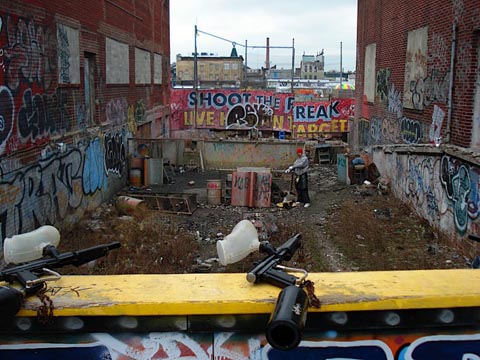 This business is exactly as sophisticated as it sounds. The pitch is made, loudly, by employee #1, a teenage kid with a microphone, and it’s dead simple. Pay $5 and get 15 tries to shoot at employee #2 with a paintball gun.

Are you not tempted by this? Then you are clearly not my teenage son, who rushed to part with his money and happily took his shots.

Beyond the novelty of the offer, what’s remarkable to me about this business is its economy. Seriously, is there a lower-cost startup idea out there? Coney Island is still miraculously decentralized, a sort of anti-Disney playground. Every ride, game, and concession is its own independent business. One guy owns the Tilt-a-Whirl, another the bumper cars, and each one has its own ticket booth.

So to start your own Shoot the Freak stand, you need:

Not to read too much into this admittedly dodgy business, but isn’t this the essence of small business success: find an audience (13-year-old boys) and give them what they want (to shoot paintballs at strangers, apparently)? Nice and tidy. And it makes a good story when you’re done.