True Story: How Bplans.com Started in 1995

January of 1995. Few people knew of the Internet, Mozilla, and the world-wide web. The so-called “Internet” had existed for years, but seemed to the rest of us (anybody outside of a few spook havens and ivory towers) like a nerdy background utility for emails. And I started bplans.com. 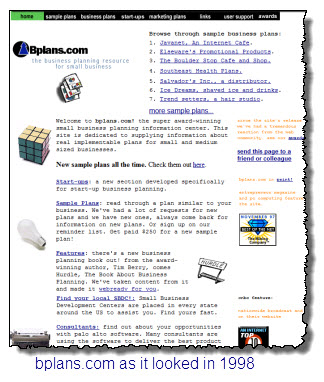 I hope you’ve noticed big changes at bplans.com lately: more information, more tutorials, and better organized, making what you’re looking for easier to find. And especially a new membership group. I hope it shows because we’ve put a lot of effort into it.

As part of the recent boom, the team asked me for stories of the so-called old days. When, how, and why did bplans.com get started. So here we go. Let’s call this a collection of loosely related stories:

From the beginning, bplans.com was always intended to be a resource site, offering free information. We did the software selling and support business at paloalto.com and gave people free content at bplans.com.  I’m not saying it was all generous and altruistic, because from the beginning – and still today – the smart people browsing at bplans figured it was dumb to not spend $99 (or less) on the software behind it. But I am saying it was all free, and we’ve kept it that way.