I love it! Jason Freedman, who calls himself “humbled MBA,” (which is right-there brilliant, before I go on) writes Startups in stealth mode need one piece of advice.: 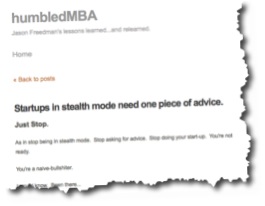 He explains more than he has to in a brilliant piece of short smart statements. He has explanations in between, and they’re work reading, but for that, go back to the original. I love the raw power of these bullet points (all direct quotes from Jason)… and I agree with every one. On a couple of them, the explanations are so rich and delightful that I can’t resist including them.

1.) Execution is more important than the idea

2.) Someone else has the exact same idea.

4.) The most likely cause of failure is your incompetence, not losing to the competition.

Jason concludes: “I could go on, but this is a fool’s errand.”

And, to his credit, he also softens a bit at the end, suggests that annoyed stealth-mode-startup readers should just prove him wrong.

Are You in Cost-Cutting Mode?

Are You in Cost-Cutting Mode?