This may surprise you. From an investor’s point of view, self-sufficiency in a startup or emerging company isn’t always a good thing. In many cases, it’s an investor’s nightmare. 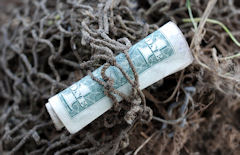 Here’s a hypothetical example. Suppose you just invested $250,000 in Acme LLC, a promising startup. Let’s say you got 25 percent ownership for your money. Years go by, and Acme grows in sales, profits and cash flow. In fact, it’s so good that it becomes cash-flow independent, meaning it’s generating enough cash, month by month, to pay salaries and fund growth.

As a successful high-tech company, Acme doesn’t make high profits. Instead, it pours as much money as it can into more growth through better marketing and better products. It buys ad words and search terms. It grows. Let’s say it reaches $1 million sales in three years, and $2 million in five years. And it keeps a healthy balance sheet, just enough cash to feel safe and no real debt.

In theory, and on paper, your investment value in Acme grows too, along with the company. Let’s say that by the time Acme’s running at $2 million annual sales, it’s worth $4 million, twice sales. So your 25 percent is worth about $500,000, twice what you invested.

Sounds like a great story, right? It is for the founders. They’ve been employed all along, and let’s assume they’re taking fair salaries and working on their own company, and their own dreams. Now they have 75 percent ownership in a good company. As long as they keep minding the business and watching the cash flow, they’ve made it. They can brag on their blogs, join the speaking circuit and send their kids to really good schools.

But it’s not necessarily great for the investor. Because that theoretical valuation of $500K is just that: theory. You, the investor, don’t get paid unless you can turn that value into cash. Acme, without an exit, also known as a liquidity event, is an investor’s nightmare. You end up having spent big money to build a business that may last forever without giving you any money back.

If you ever wonder why investors want majority shares, or why they tend to invest in groups with other investors, this example might help. It’s not that they don’t trust your  motivation, but they know that things change; sometimes entrepreneurs who started a company with an exit strategy end up changing their minds. They want to keep it forever. And where does that leave investors?